New museums and community centres. Free bus rides provincewide for children 12 and under, tax-free electric bikes and a pandemic rebate on vehicle insurance -premiums (if ICBC can afford it).
Dec 3, 2020 9:12 AM By: Les Leyne 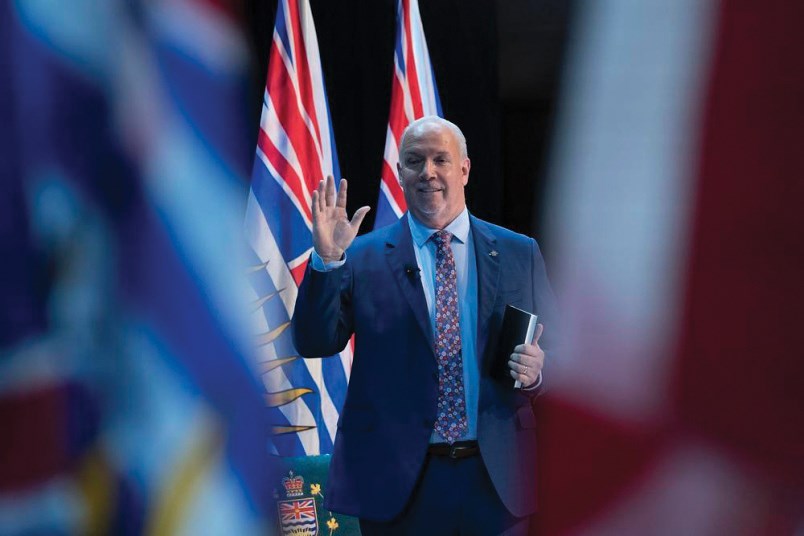 Premier John Horgan is sworn in during a virtual ceremony in Victoria on Thursday, Nov. 26, 2020.THE CANADIAN PRESS/Jonathan Hayward

New museums and community centres. Free bus rides provincewide for children 12 and under, tax-free electric bikes and a pandemic rebate on vehicle insurance -premiums (if ICBC can afford it).

Race-based data collection, a new fund to cope with street -disorder and no more plastic bags.

Those are a few of the items on the to-do list Premier John Horgan issued to his new cabinet this week. Following standard practice, he wrote mandate letters to all 24 of them. The main themes are identical – - put people first, work on -Indigenous reconciliation, fight climate change and get B.C. through the pandemic.

But there was also a section in each devoted to specific tasks ministers are expected to fulfil. It’s a grab-bag assortment of ideas expected to develop over the four-year term of government.

The museum-building binge falls to Tourism, Arts and Culture Minister Melanie Mark. In addition to continuing the planned redevelopment of the Royal B.C. Museum, she is tasked with continuing the development of a Chinese-Canadian museum and “starting work to create a first-of-its-kind museum” to document the history, art and contributions of South Asian people in B.C.

Progress is also expected on a project to honour the Japanese-Canadian community by “providing lasting recognition of the traumatic internment of more than 22,000 Japanese-Canadians during World War II” in libraries, communities and at the B.C. legislature.

She is also directed to provide funding to deliver a redeveloped state-of-the-art Jewish community centre of Greater Vancouver, complete with -hundreds of child-care spaces.

The plastic-bag ban will likely arrive sooner than the museums, as the work is already well underway. Various -municipalities have been considering it, even though the City of Victoria’s initial effort was rebuffed by the courts. The federal government is also aiming for such a ban next year.

Cycling groups have been lobbying to get the seven per cent provincial sales tax lifted on e-bikes and it is now an instruction to Finance Minister Selina Robinson. Regular -bicycles are already exempt frowm the PST. Exempting e-bikes would save most purchasers between $100 and $200.

As well, Transportation -Minister Rob Fleming and -Environment Minister George Heyman are directed to move on making transit free for -children 12 and under.

The ICBC rebate is conditional.

Drivers in several other provinces got vehicle-insurance rebates earlier, based on reduced travel during lockdown measures. It was ruled out by ICBC because of its financial state, but now it’s back on the table – maybe.

Responsibility for ICBC was shifted from Attorney General David Eby to Public Safety -Minister Mike Farnworth, and Horgan told him to “deliver a fair deal to B.C. drivers by providing COVID-19 premium rebates from any surplus ICBC delivers during the pandemic.”

The key word is “any.” If there is no surplus, there will no rebate.

While Eby drops ICBC, he was given overall responsibility for housing. Both he and Robinson are now responsible for the condo-insurance crisis. An upcoming report by the Financial Services Authority will dictate the government’s response, but Horgan put one specific idea on the back burner.

He told both ministers that if condo-insurance premiums “have not corrected by the end of 2021, explore a public strata insurance option.”

That gives the insurance industry a full year to retreat from the astronomical increases imposed this year on many buildings, before the government considers taking that line of business away from them.

Eby is also told to introduce legislation to pave the way for race-based data collection to modernize sectors such as policing, health and education. B.C. generally maintains Indigenous information, but collecting more is seen as a way of reducing -systemic discrimination.

Municipal Affairs Minister Josie Osborne is tasked with overseeing a new Strengthening Community Fund from which cities and towns can draw to help tackle street disorder.

Horgan’s outline said it will help with “cleanliness and public safety and improve their ability to respond to challenges posed to businesses and -neighbourhoods by homelessness.”

His last bit of advice to ministers: Be ready for -anything. “Our work must -continually evolve to meet changing needs.”