U16 Storm boys are back to their winning ways

With the Cliff Gilker playing field looking the best it has ever been and the sun shining, it was time for the Sunshine Coast Youth Soccer Association U16 Storm boys rep soccer team to showcase two Saturdays in a row what they can do as they welcomed
Nov 5, 2020 9:59 AM By: Patrick Fitzsimons 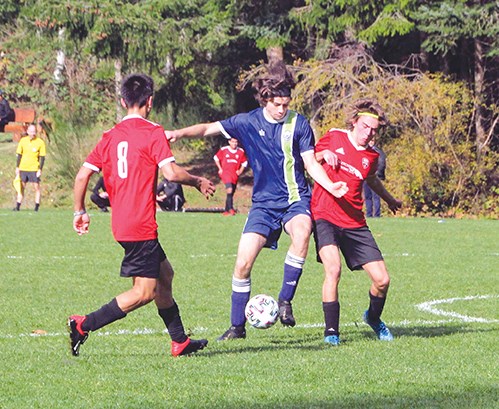 Jack Marshall demonstrates his tenacity, skill and speed that will keep this U16 Storm team winning no matter what Vancouver throws at them.Brian Blackwell Photo

With the Cliff Gilker playing field looking the best it has ever been and the sun shining, it was time for the Sunshine Coast Youth Soccer Association U16 Storm boys rep soccer team to showcase two Saturdays in a row what they can do as they welcomed the rival North Vancouver Storm team on Oct. 24 and the NV Mavericks on the 31st.

The sidelines were alive with fans young and old from all over and from whistle to whistle both games were sports thrillers to say the least.

After a slow winless start to the season, our Storm boys team were poised for a full throttle coordinated combination of new and improved defensive strategies, a type of mid-field ball movement poetry and an attacking front line that finished the plays with speed and great communication.

Of special mention and a vital element in these wins came by way of the unbelievable keeper Duncan Service, who managed some of the most phenomenal saves ever in this team’s history.

Both North Van teams were kept on edge the entirety of both games. Our boys showed the fans who really owns the Storm name by dominating and winning 3-1 two weeks ago against the NV Storm for the first victory.

Last Saturday the Storm boys welcomed a true nemesis from last year – the NV Mavericks, who they beat in an absolute barn burner of a game last year and etched in the minds of the fans that this will forever be a clash worth watching for years to come.

Well, the day came and if anyone could have witnessed one absolute thriller for any sport anywhere, this would be the game.

The NV squad looked to avenge last year’s loss with a very clever passing game and our boys, riding high off the previous week’s win, wanted to cement another victory using all the fantastic unity they have been working on in practice. It played out beautifully for both teams but the Storm were simply too much in every way, putting a 2-0 win in the record books.

One more home game, once again at Cliff Gilker this coming Saturday at 12 noon if you want to see this team perform, before the boys take it on the road and bring this vibrant soccer hurricane right to the Vancouver teams’ doorsteps.