Koenn Sauer and Teagan Sweet to continue their competitive careers
Apr 29, 2021 10:46 AM By: Keili Bartlett 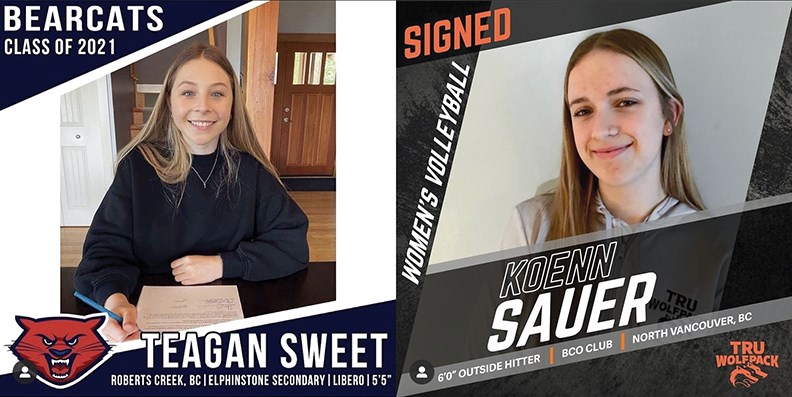 Elphinstone Secondary seniors Koenn Sauer and Teagan Sweet (left) have both been selected to play on post-secondary volleyball teams.Courtesy of Koenn Sauer

Although the Sunshine Coast Volleyball Club (SCVC) folded during the pandemic, that didn’t stop two Elphinstone Secondary School students from making the cut for positions on post-secondary teams.

Seventeen-year-old Koenn Sauer will be joining the Wolfpack women’s volleyball team at Thompson River University this fall, as the right side hitter while she studies education.

For Sauer, it’s an opportunity to continue competing in the sport she’s been playing since her elementary school days. She’s been a captain for a team competing at BC Games, played with SCVC until last year, played on the Elphinstone Secondary teams throughout high school and currently plays with BCO Volleyball Club North Vancouver.

Sweet said making a post-secondary team is a goal she’s been working toward.

“It means a lot to me that I get to continue playing the sport I love at a huge level, and be super competitive and continue my career and just have fun,” Sweet said.

Both athletes made the cut without coaches seeing them play in person. They submitted videos of team practices and communicated with the coaches online, then were offered a spot on their respective teams.

Elphinstone Secondary coach John Brisebois said he wasn’t surprised to learn the two teammates will be playing competitively in post-secondary.

“Koenn is, I would say, one of the hardest hitters I have ever coached or experienced – and I’ve coached for 35 years. I think this is just a natural progression for her,” Brisebois said. “Where Koenn is an external player, where she plays with velocity, momentum and strength, Teagan is an internal player. She is very, very mentally savvy and anticipates extremely well. She’s fearless. So it didn’t surprise me at all that these girls had an opportunity to move on.”

Their coach added that their dedication to the sport helped them excel, especially considering they continued to practice with the Elphinstone team until the end of March, even though tournaments and games against other teams were prohibited. He said their teams will be gaining hard-working athletes and a “sense of humour.”