Young Rocky Nordvie has another accomplishment to add to his promising athletic career.
May 6, 2021 11:39 AM By: Keili Bartlett 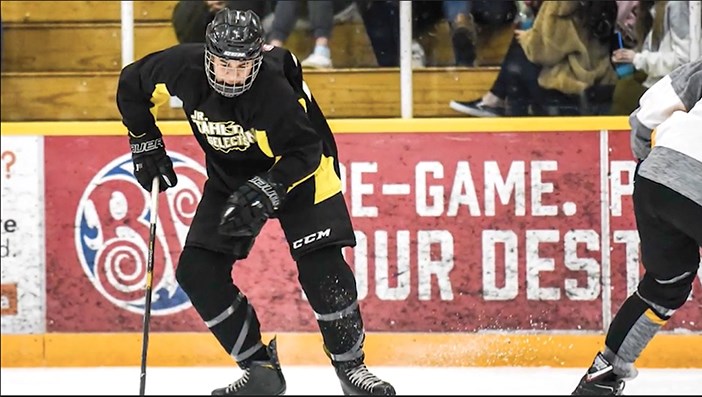 Rockey Nordvie, a member of the shíshálh Nation, was awarded the 2020 Premier’s Awards for Indigenous Youth Excellence in Sport for his dedication to hockey and his education.Courtesy of the Indigenous Sport, Physical Activity and Recreation Council

Young Rocky Nordvie has another accomplishment to add to his promising athletic career.

The 15-year-old hockey player is one of 30 athletes across the province being honoured with the 2020 Premier’s Awards for Indigenous Youth Excellence in Sport, and one of six recipients from the Vancouver Coastal region.

The award is presented by the Indigenous Sport, Physical Activity and Recreation Council (I·SPARC) and the Province of British Columbia to Indigenous athletes under 25 years of age who compete in a sport, and demonstrate a commitment to their education and culture and promote healthy and active lifestyles.

Nordvie is a member of the shíshálh Nation. Before making the prestigious Pacific Coast Hockey Academy’s AAA U16 prep team in Victoria, he was homeschooled in Sechelt and played internationally with his Sunshine Coast Atom team.

The first line centre was also invited to try out for the WHL bantam draft for the Saskatoon Braves, but couldn’t attend because of the pandemic. His dedication to his team and his education made him a prime candidate for the award.

The regional awards ceremony could not be held this year, so I-SPARC created a video to highlight the athletes’ achievements. In it, Tourism, Arts, Culture and Sport Minister Melanie Mark congratulated the young recipients.

“I’m so proud of your accomplishments both on the field and in your community. Your outstanding achievements are a source of pride, especially for your family, coaches, and everyone who has supported and encouraged you along the way,” Mark said.

“This, to me, is reconciliation in action. More than ever in these challenging times, we need young people like you to give us hope. Keep following your dreams and reaching for the stars.”

Mark shared her own experience of how being active in sports helped her “cross the finish line” and become the first person in her family to graduate from high school.

In a written statement about receiving the award, Nordvie said he hopes to reach the same playing level of his late uncle who was drafted to the Montreal Canadiens, and thanked his parents for their support.