In January a two-year-old Gibsons-based gym had just expanded into its new, larger space on the Sunshine Coast Highway to fit its growing membership. Two months later, public health restrictions forced the gym to close its doors.
May 7, 2020 10:50 AM By: Sophie Woodrooffe 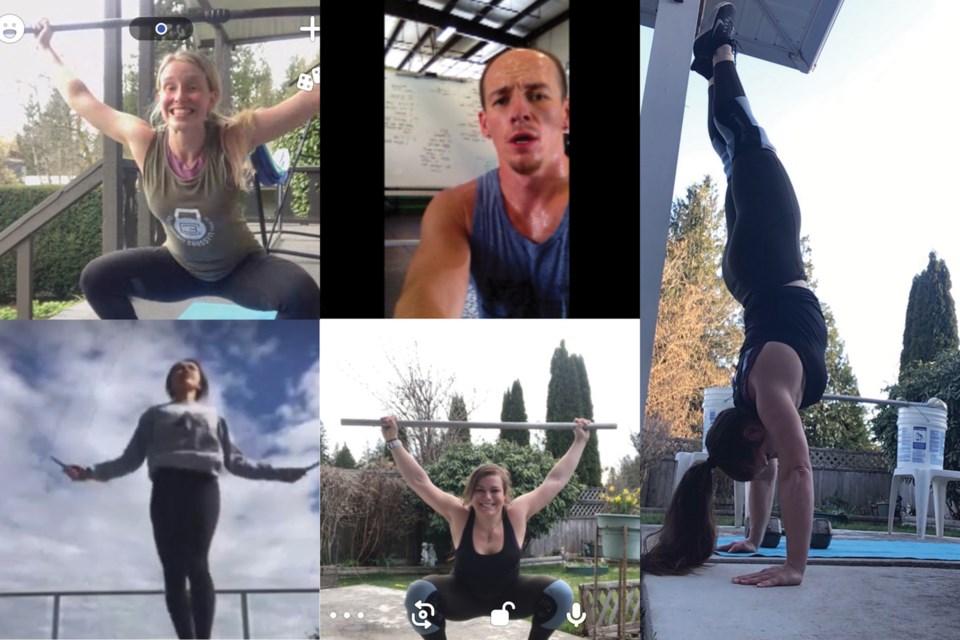 In January a two-year-old Gibsons-based gym had just expanded into its new, larger space on the Sunshine Coast Highway to fit its growing membership.

Two months later, public health restrictions forced the gym to close its doors. So instead Milan Fraszczak, as with other Sunshine Coast fitness instructors, opted to bring physical distancing to a social medium.

Between 10 and 15 members join him each morning for live workouts via video-conferencing platform Zoom. He posts short videos to social media for the public to use for free.

While Sunshine Coast residents are blessed with an abundance of trails and outdoor recreation opportunities, many rely on the routine and community that comes from group fitness.

“Some people reach out and say, ‘I really need motivation today, I can’t really be bothered to do anything,’” Fraszczak said.

He describes the trend to move workouts online as “a no-brainer.”

Verna Chan, owner and operator of The Garage, a small home-based fitness studio that’s been running for 14 years, is also giving free tutorials and loaning out equipment.

“People are kind of adapting and realizing that’s going to be their only option for a while,” she told Coast Reporter.

Owners are bringing their own spin to the online business.

In Wilson Creek, Sunshine Coast Lift Strength and Conditioning Centre is offering a combination of subscriptions and free online material. They are also renting.

In Gibsons, Gillian Morrison of GM fitness has opted to charge a fee for her “online quarantine challenge,” which she described as a “big hit.”

So far, 280 people have joined the private Facebook group. One-time fees have covered her studio’s rent for three months. She has also partnered with Sechelt Pilates. “It’s building community, and keeping people accountable and moving in the safety of their homes,” she said in an email.

While feedback for online lessons has been positive, for many clubs, it’s no magic bullet.

Trisha Sarker, executive director for Fitness Industry Council of Canada, told Coast Reporter virtually all fitness clubs in the country have been closed since mid-March. “During this closure, many clubs and trainers have chosen to reach out to their clients via virtual methods,” she said. Still, the pandemic “has been a devastating time for the industry as many fitness clubs have been struggling with rent.”

Since she operates her business out of her home, rent isn’t an issue for Chan, but business is still down 80 per cent. And not everyone is comfortable going digital.

“You have to figure out Zoom, you have to have a place to put [a camera] and the computer that will do it.”

And despite his efforts, Fraszczak said heading into the second month of restrictions, more clients are suspending their memberships. “Initially we weren’t that affected, but every week we’re affected more and more.”

And while a “phased-in approach” to reopening the economy has been promised by B.C. Premier John Horgan, there are no specific guidelines for fitness clubs yet, leaving owners to develop their own plans.

Hygiene concerns are especially heightened for gym operators, since people sweat, droplets disperse and COVID-19 can spread even by people without symptoms. Chan’s studio, for example, normally accommodates up to six people exercising in close quarters. Because of that, she said she’s in no rush to reopen. “I think people’s health is too important to risk.”

Fraszczak is also taking a cautious approach. He’s waiting for the province’s state of emergency to be lifted. On April 29, it was extended until mid-May.

In the meantime, on top of the client pep talks and morning workout routines, Fraszczak is creating online videos for use once the pandemic recedes. With people cooped up at home, he’s optimistic his big new space on the Sunshine Coast Highway will be back in high demand. “I think it will be a good time to kind of build the business back again, but time will tell.”