Malaspina Regatta – a perfect day on the water

The Garden Bay Sailing Club held its 31st annual Malaspina Regatta on July 4. Due to the COVID situation, the regatta was on and off during the past few months – mostly off.
Jul 9, 2020 10:40 AM By: Ron Badley 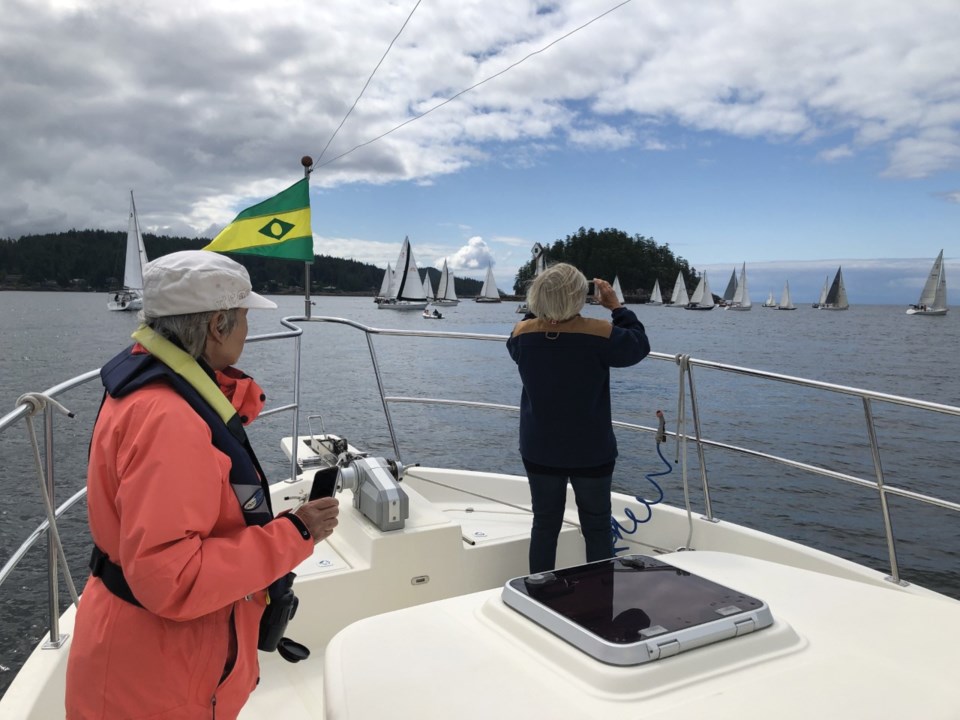 The start of the regatta from Canik Too.

The Garden Bay Sailing Club held its 31st annual Malaspina Regatta on July 4. Due to the COVID situation, the regatta was on and off during the past few months – mostly off. In early June, however, it was decided the regatta was on, but with several changes.

Keep in mind that pretty much every sailboat race (and every group event worldwide) has either been cancelled or postponed this year. Regattas consist of several parts. There is registration and a skippers meeting before the race. This was successfully done by email. There is the actual race. This was done by the fact that everyone was literally in their own boat and by using crew in their personal group, sailing single-handed or short-handed. As we are all in sailboats, close contact with others is not going to happen!

Then there is the after party and trophy presentation. This was tricky, but David Twentyman, our commodore, insisted on a very small group of regatta participants only. A short and sweet and very COVID-responsible gathering (masks, all appropriate gear and distance) was held on the docks graciously provided by John Henry’s Resort and Marina after the race. And, what a success it all was!

The race itself was a perfect day on the water. After so much wet and cold weather, race day brought mostly clear skies and a lovely breeze. The course turning marks were set by our local RCM-SAR unit 61 and the regatta got underway at 11 sharp under the control of our race committee aboard Canik Too.

With a clean start just outside the entrance to Pender Harbour, 26 boats ranging from 24 ft. to 53 ft. were racing the 12 nautical mile course.

It was a tight beat to the first marker placed on Hospital Reef, which Raven Lunatic rounded in the lead. The downwind leg to Acland Rock was a little slow for the boats that chose not to fly a spinnaker. Once around the marker, the tight beat back to the mouth of the harbour under clear skies and freshening conditions was absolutely postcard perfect!

The finish line inside the Harbour challenged most racers with fickle winds around the Scardon Islands.

First across the finish by a very large margin was Brad Lowell on Raven Lunatic, followed by Claus Sjogren on Pretender with Isabelle-Marie in third owned by Allyson Nelson with Rick Reynolds on the helm.

It was a wonderful day. Thank you to all who participated in and organized this very special annual event!