Tennis doubles record-holder on the Sunshine Coast while filming training videos
Apr 15, 2021 9:28 AM By: Keili Bartlett 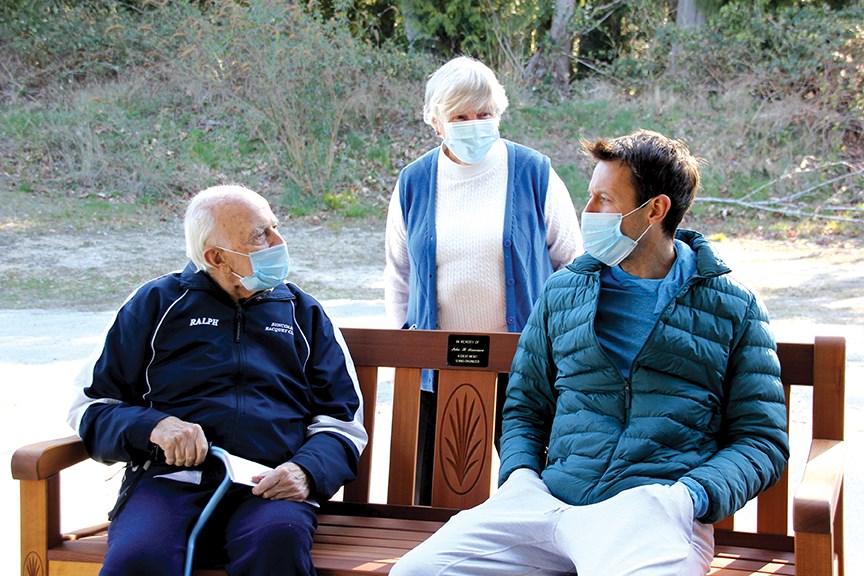 Amidst strict pandemic protocols, a former Olympian found an opportunity at the Suncoast Racquet Club to use the quieter-than-usual space to create new training tools and meet some local fans in the process.

Daniel Nestor is known for his extensive resume, including eight Grand Slam doubles titles and winning the 2000 Olympic gold medal to become the first Canadian (along with his partner) to win an Olympic medal in tennis. In 2016, he became the first player in the Association of Tennis Professionals history to record 1,000 doubles wins. After 1,134 consecutive weeks of ranking in the top 100 doubles players, he retired in 2019.

On April 13, the club hosted a socially distanced meet-and-greet with Nestor outside the Sechelt facility.

Nestor said it was nice to meet those who still remember his accomplishments.

“Usually, in life, things get forgotten quickly,” Nestor told Coast Reporter. “It’s always nice to have people reminisce and remember some of the stuff that I did and chat with him about it.”

Ninety-year-old fan Ralph Meyer was the first to sit down with Nestor. Meyer is not only one of the club’s oldest members, but was on the committee that helped create the current version of the club and its facilities. He and his wife June also helped fundraise for the facility.

Meyer jumped at the opportunity to meet the man whose career he so closely followed since the 1980s, once writing to Maclean’s magazine because he believes Nestor’s career has been underrated by the media.

“I didn’t have any expectations,” Meyer said of finally meeting Nestor. “I just knew he is a good sportsman and a good tennis player. And to me, that’s everything.”

As athletes have less access to facilities, coaching and training during the pandemic, Nestor and Budimac hope their videos can be used by doubles players of all levels. The series of 15 videos approximately 10 minutes long will summarize Nestor’s 28-year career as a doubles tennis player, and include his thought process, communication skills with teammates and how to deal with pressure.

“There’s some subtle things that if they were able to implement a little bit better, which would dramatically kind of improve their performance,” Nestor said of players.

“One thing that we are trying to bring to the table is just that inspiration and motivation that they can get better at any level ... move forward within their game and hopefully inspire them to make some changes and play better and feel better about themselves,” Budimac added.

When Budimac and Nestor were looking for a place to shoot their videos, they chose the Sechelt location, where Budimac has participated in a training day for locals in the past.

“We felt very warmly welcomed and really enjoyed our time,” Budimac said of his previous visit. The exterior and interior of the club also aligned with the kind of location they were looking for.

“It was definitely very nice for the community to take us on in these times, and to allow us to come out in a safe way and be able to produce something like this knowing that it’s hopefully going to help not only locals, but also that a small community club will potentially reach … thousands of viewers worldwide,” Budimac said.

The club’s communications director, Tamara Jacobsen, said they’re looking forward to welcoming Budimac and Nestor back again in the future, and getting some recognition for the club.

“Because he’s using our club, it’s like this really great shot in the arm for us, because so many people don’t even know, still, that there’s been a tennis club in Sechelt for years,” Jacobsen said.

While Jacobsen said Nestor had planned on providing some coaching when they first booked the club for the video shoot, that training couldn’t be offered during the pandemic.