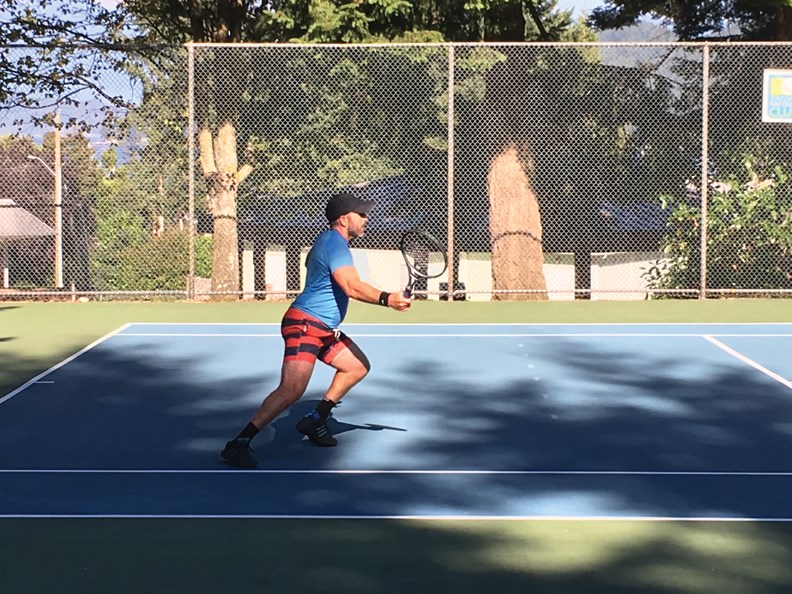 Robert Paul from Victoria who played the men’s singles final against Chad Brachat.

It was a scintillating weekend of tennis at the 42nd annual Sunshine Coast Open Tennis Tournament.

With close to 60 participants from as far away as South Africa, Palm Desert, Calgary, Coquitlam, Victoria and the outposts of Sandy Hook, games were tight and well organized by Shelley and Darcy Lawrence, the tournament directors.

In the end, many of our local players prevailed, taking home the coveted trophies.

In the Mixed Doubles final played on grass, Gustav Guzek and Shelley Lawrence of the Sunshine Coast outmatched Michael Burch and Kristina Stosek of West Vancouver 6-2, 6-0.

The Men’s Singles saw the two top seeds battle it out in an all-Victoria final with Chad Brachat triumphantly retaining the trophy 6-4, 6-4 over Robert Paul.

In Women’s Singles Tammy Klashinsky of Sechelt captured gold after coming back from a set down in the semis to defeat Carolyn Haley of White Rock, 6-2, 6-7 (4) 6-2.

Janis Johnson and Russell Crum once again hosted the tournament barbecue in the park-like setting of their Roberts Creek home. Featuring tennis on their grass court and a locally-caught salmon dinner, the record 75 attendees had a fantastic evening. Those players who came to the tournament for the first time echoed the thoughts of returnees and local tennis vets when they pronounced the Sunshine Coast Open to be one of the most fun and best organized tournaments they’ve ever played in.