For those wondering how long it takes to get from one ferry terminal to the other by foot and mostly through forest, now there is a time to beat.
Apr 25, 2019 9:54 AM By: Sophie Woodrooffe 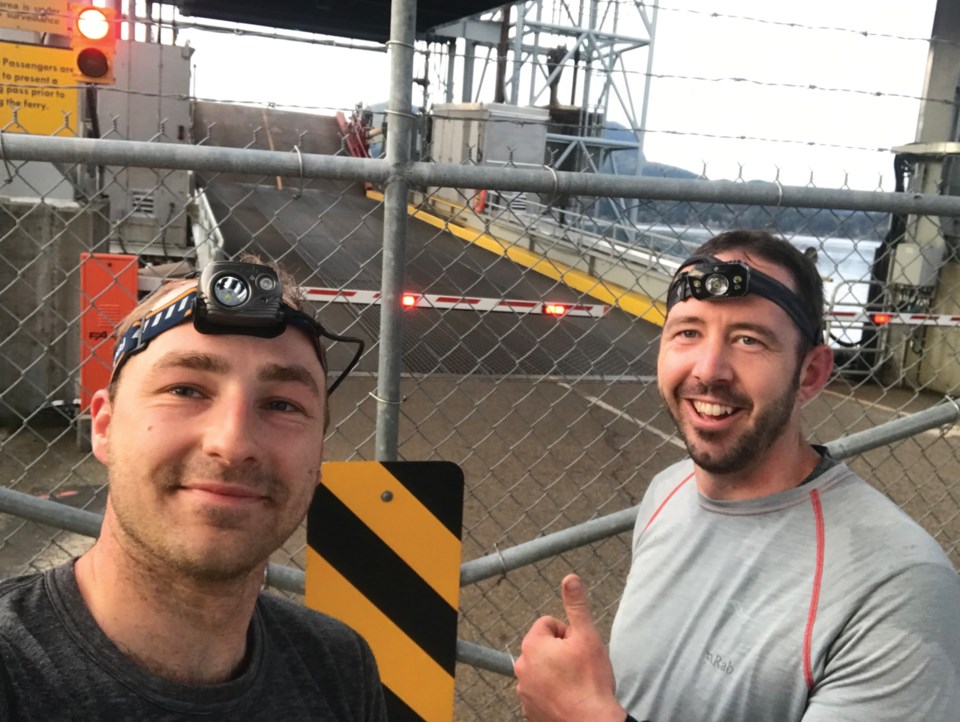 For those wondering how long it takes to get from one ferry terminal to the other by foot and mostly through forest, now there is a time to beat.

On April 14, Luke Till and Jeff Ritchie of Roberts Creek ran the length of the Lower Sunshine Coast using a system of trails in a fastest known time of 14:19:20, with only one “huge blister” reported, according to Ritchie.

The approximately 96-kilometre route that Till mapped out is a hybrid of the Suncoaster and BC Bike Race trails, beginning at Earls Cove ferry terminal with its terminus at the terminal in Langdale.

“We really wanted to do the trail – it wasn’t really about the timing; it was just linking it all together for the sake of establishing a potential route,” said Till about their decision to forgo asphalt in favour of hiking and biking trails, describing it as “a fine line between the most direct route we could create and the most aesthetic.”

Both Till and Ritchie are avid runners and were also following the work of local government to complete the Suncoaster Trail, which currently runs from Earls Cove to Halfmoon Bay. Till said the attempt was to find an ideal route. “We made sure we didn’t go on any private property, we didn’t go through any friends’ backyards, we wanted to make sure it was all public land,” he said. Ritchie said the plan wasn’t to create a new Suncoaster Trail, but the route they chose would make a good one. “I think it’s more scenic,” he said.

In the months leading up to the run, they completed sections of the course and experimented with directions before settling on the Earls Cove to Langdale configuration. Till, who has run ultra-marathons in the U.S., said the section from the top of Field Road to Langdale offered “some of the nicest running trails anywhere in the world,” with a gradual gradient and loamy soil adding to the pleasure.

Four elk herds were spotted, but people were few. For the duration of the run, Till and Ritchie saw a handful of people on the trails outside of Sechelt. “We don’t suffer from over usage,” Till said.

Despite the exertion required – they burned more than 8,000 calories each – both were spared significant discomfort or injury, which they attributed to consistent training, which began eight months ago, and included 5:30 a.m. Monday runs.

“There were a lot of mornings I would have shut off the alarm, if it was just me,” Ritchie said, but knowing his friend was depending on him was “very motivating.”

The pair were assisted on their journey by a friend who packed his truck with snacks and water. Ritchie and Till arrived at Langdale terminal before darkness fell and both made it to work the next day.

Till said he was inspired to try the route because with a new family, it was less practical to travel for ultra-marathons. Ritchie called the run “a feel-good achievement.”

With that to-do item struck from the list, another goal may be to complete the three major peaks in Tetrahedron Provincial Park in one day, Ritchie said. “We’ll have to come up with something in the fall, I guess.”