Grump’s voice booms within the confines of the former Gibsons Minor Baseball Association (GMBA) batting cage:“Load early! Why are you smiling? Don’t smile! Hit the ball!” Four-year-old Oliver Tulk stares Grump down and states, “You’re not so grumpy.
Oct 22, 2020 2:51 PM By: Brian Scarr 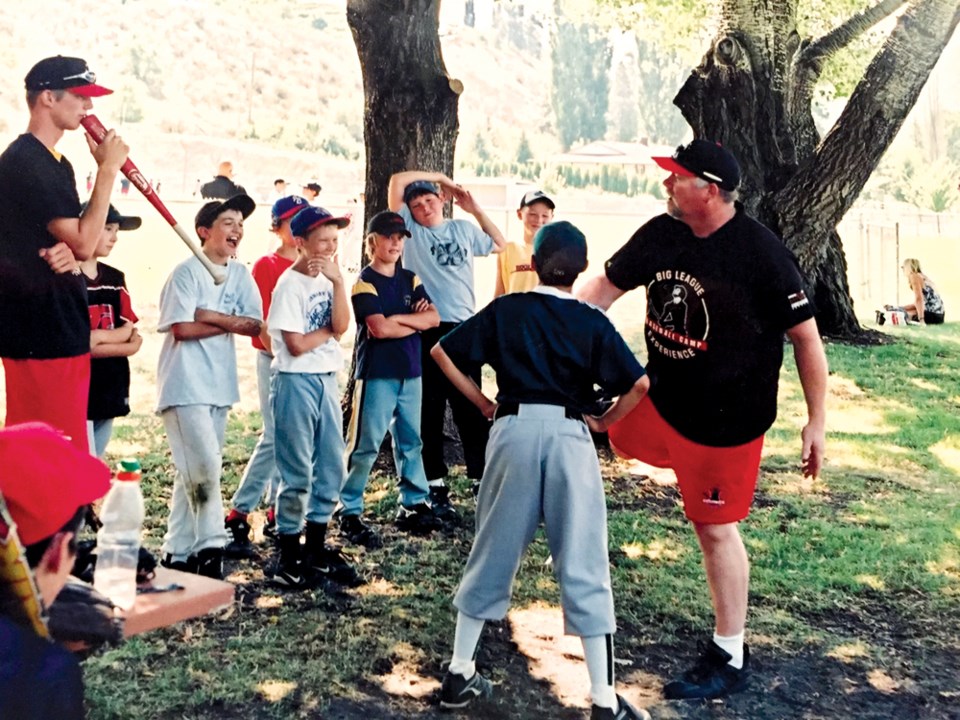 Sunshine Coast boys being entertained by Pat Phelan (right) at the Big-League Experience Baseball Camp, summer of 2004. Clearly, the boys were not “buying” Grump’s “grumpiness.”Submitted

Grump’s voice booms within the confines of the former Gibsons Minor Baseball Association (GMBA) batting cage:“Load early! Why are you smiling? Don’t smile! Hit the ball!”

Four-year-old Oliver Tulk stares Grump down and states, “You’re not so grumpy.”

“Are you kidding me?” barks Grump.

Every one of the children there is now laughing and giggling uncontrollably.

That’s the way he was – a kind and caring coach with a pseudo-grumpy shtick. Young athletes saw right through it and they loved him for it.

Pat Phelan (best known as Coach Grumpy or simply Grump) was one of Canada’s best-liked coaches. He coached all ages from T-ball to the pro level, guiding many young players to college and professional careers. He worked with a number of Team Canada’s women’s softball athletes, wrote coaching manuals, and taught coaching courses all over the country. He mentored and inspired literally thousands of baseball people.

Starting about 12 years ago, every Friday in the off-season, Grump would travel from his home on the Lower Mainland to Gibsons to teach youth athletes hitting skills. Participants ranged in age from four through 18 and included boys and girls from hardball and softball. Batting development (Grump insisted it be referred to as “hitting”) was the focal point. However, the key components of his program were the intangibles – emphasizing to the athletes to be kind and caring young people. Every week he gave them “homework” to do. He had them agree to do meaningful “chores” to contribute to their families.

“We were fortunate to have a coach of such skill and experience become part of our baseball community,” said one colleague this week.

Pat Phelan passed away in the early morning hours of Saturday, Oct. 4 after battling a lengthy illness. He was only 63 years old.