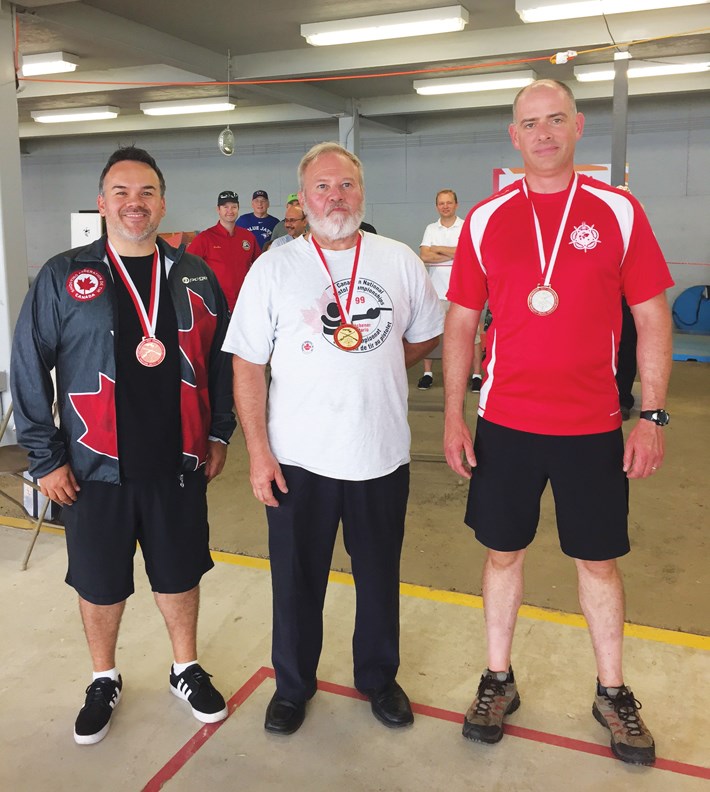 Gibsons marksman Allan Harding has a great shot at making the 2020 Olympic team after setting a new record at the Canadian National Pistol Championships last week, bringing home gold in the 10m and bronze in the 50m competition.

Harding managed to keep all of his shots in the 10m Men’s Pistol competition within millimetres of the bullseye, netting a 233.2 score, a gold medal and a new national record.

He was shooting with a new Steyr air pistol he had just received three weeks before the nationals were held in Ontario (July 30 to Aug. 7) and he was pleased with how the gun performed.

“The airguns today that they make are the most accurate guns on the planet,” Harding said.

“Basically if you were to put them in a vice they would shoot through the same hole all day. So if anything happens on the target it’s basically user error.”

Harding has been practising his 10m shooting skills religiously at his Gibsons home, where he has an indoor range set up.

The 10m event is shot indoors, while the 50m event is shot outside with a higher calibre gun. In the 50m, shooters must take into account the wind and weather, and while it’s been hailed by many as the ultimate air pistol event, it was dropped by the Olympic committee for the 2020 games because it’s traditionally been a men’s-only sport.

The committee felt there wasn’t enough time to properly form and train a mixed men’s and women’s team, so in the interests of gender-equality, the 50m was cut in June.

Before the cut, Harding was training for the 50m so he was eager to get on the course at the Nationals, which still had the event on the program.

“I went into the 50m finals and made it all the way to bronze and on my last shot in the elimination there were three of us and any one of us could have taken bronze,” Harding said.

“But my shot was just a little bit outside where the other two guys shot and they advanced to the other two shots and I got dropped.”

Each of the shooting events was done in elimination style, with marksmen either advancing or being cut after each round.

Harding was happy with his placement in the 50m and excited about his 10m gold win, which will help him catch the eye of the 2018 national team. He hopes to make it onto that team at the end of this year, spend 2018 on a world cup tour with them and be one of those chosen to go to the 2019 Pan Am Games in Peru.

“That event is really our best shot to get quota spots for the Olympics in 2020,” Harding said, noting shooting at the 2020 Olympics is his ultimate goal.

“So really the time to start is right now. I need to make the team for 2018 because if I don’t do that it’s just a domino effect and I can’t possibly make it.”

Harding’s next chance to prove himself will be at an open air pistol event in Winnipeg in October.

His scores from that event and the one he just completed will be taken into account when being considered for the national team.

The roster for the national air pistol team will be released sometime in November or December.