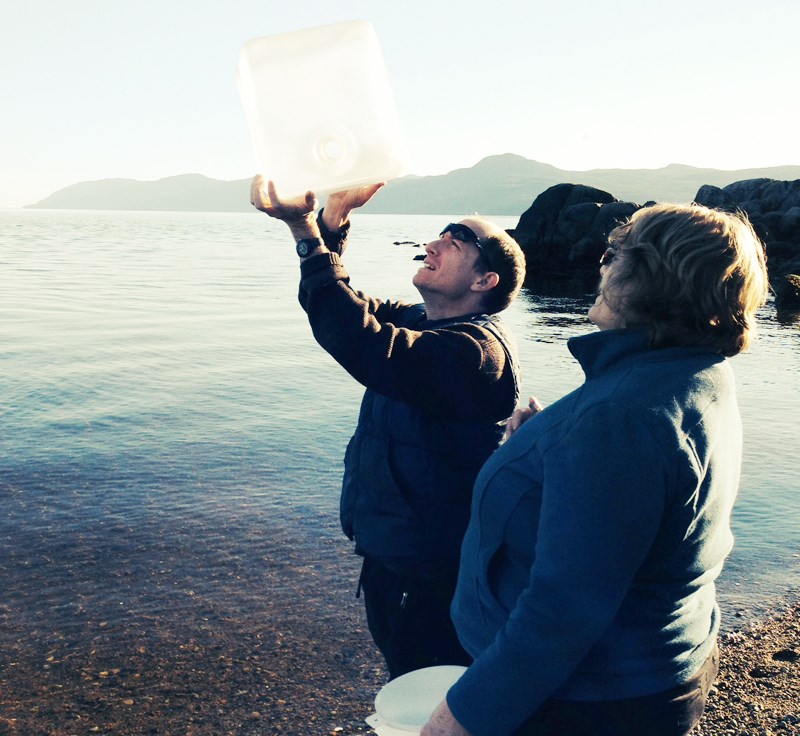 As the first batches of seawater samples collected by citizen scientists along the B.C. coast are being analyzed in Victoria, the results of radiation testing on 19 sockeye salmon and steelhead samples have come back negative for Fukushima-related contamination. And tests conducted so far this year on water samples from Prince Rupert to Victoria have also found B.C.’s inshore waters to be Fukushima-free.

The salmon and steelhead samples, provided by Nisga’a First Nation, were taken at the end of August when the fish were returning to the Nass River in northern B.C. The tests were part of the Integrated Fukushima Ocean Radionuclide Monitoring (InFORM) Network, which was launched early this year and involves academics, federal agencies, non-governmental organizations and citizen scientists.

“We weren’t able to detect cesium-134 which is the signature of Fukushima (due to its two-year half-life), but when we added all the signals together we did see some cesium-137, which is left over from nuclear weapons testing,” project leader Jay Cullen, a chemical oceanographer at the University of Victoria, said in an interview last week.

The residual amount of cesium-137 present in B.C. fish from weapons testing fallout in the 20th century is not considered a health risk to consumers, according to Health Canada.

Cullen said the first month of seawater sampling from InFORM Network citizen scientists had arrived at his lab and was being processed.

On the Sunshine Coast, Cullen said, he has recruited volunteers in Sechelt, Gibsons, Halfmoon Bay, Lund and Powell River.

“We did Powell River first. We may contact some in Sechelt to do the next turn,” he said. “There are lots of volunteers from the Sunshine Coast, not surprisingly the Lower Mainland, and southern Vancouver Island.”

Although the samples are still being analyzed, results of other tests carried out this year showed no detectable levels of cesium-134 along the outer B.C. coast or the Salish Sea, despite the presence of extremely low concentrations offshore since June 2013.

Test sites included Bamfield on Vancouver Island in February, Quadra Island in March, Haida Gwaii in April, Prince Rupert in August, Vancouver’s Jericho Beach in late September and Victoria on Oct. 15. Except for Victoria, which was the first InFORM Network citizen scientist test site, all the other tests were part of the U.S. Woods Hole Oceanographic Institution’s crowd-funded research program called Our Radioactive Oceans.

“At Ogden Point in Victoria, we see the background weapons testing cesium-137 (1.3 becquerels per cubic metre of water), and we don’t see anything from Fukushima,” Cullen said, pointing also to results from Kelp Watch, a California-based research project that extends from Baja-Mexico to Alaska. “So far cesium-134 has not been detected.”

By contrast, 1,500 kilometres offshore, the level of “Fukushima-specific cesium-137” increased between February and August from about two to five becquerels per cubic metre.

While scientists “don’t really know why we’re not seeing it along the coast yet,” Cullen said there are two physical factors that could be keeping away the contaminated plume that has moved eastward from Japan on the North Pacific Current and is expected to intensify during the next one-and-a-half to two years.

One factor is the “upwelling of waters, which normally is strongest in the spring, coming from depths that have less Fukushima-related signals,” he said.

“The other is that there’s so much fresh water coming from the coastal rivers, the Fraser River especially. The Salish Sea is like a big estuary. So that really large volume of fresh water may be insulating the coast of Vancouver Island from Fukushima-related water.”

The negative test results don’t convince everyone, however.

“I get emails from people saying that all of the organisms are gone from our Pacific waters, and it’s from Fukushima-related activity.”

Cullen said he understands people’s fears about radioactivity, and acknowledged it’s “clear that there are changes happening in our ocean ecosystem.” But the “insults to our environment” that appear to be stressing marine organisms, he said, are factors such as overfishing, ocean acidification, industrial pollutants, and invasive species.

“As a scientist I look for evidence and we don’t see radionuclides from Fukushima in the evidence. I get accused of saying everything’s fine and that’s not what I’m saying at all. The oceans are not in tip-top shape.”

The problem with “individuals who for whatever reasons are convinced that Fukushima is killing our oceans,” he said, is that it distracts from actions that can be taken to address provable harms to B.C.’s marine environment.

“There are very specific things that we can do, or could do, that would lead to improvement of health to the ocean – PCBs in the past, fire retardants (PBDEs) in the present. If we don’t use the chemicals they won’t get in the environment.”