Sunshine Coast Regional District (SCRD) staff are looking into how to make bus passes free or cheaper for youth and families by the end of the year after parents pushed for the change.
Sep 30, 2019 4:05 PM By: Sophie Woodrooffe 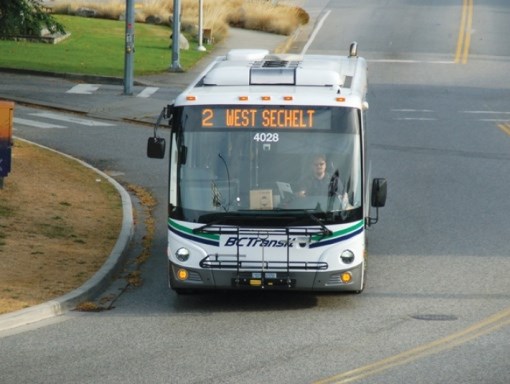 Sunshine Coast Regional District (SCRD) staff are looking into how to make bus passes free or cheaper for youth and families by the end of the year after parents pushed for the change.

“Even after transit has significantly expanded on the Sunshine Coast, little has been done to encourage younger riders,” Silas White said in a letter to SCRD directors that was introduced at an infrastructure committee meeting on Sept. 19.

White said fares were “undoubtedly the biggest obstacle to youth ridership,” and urged directors to find a way to reduce fares, which would ease the financial burden for youth and for caregivers similar to him whose children attend school outside of their catchment area.

“A point of contention for our program, for many years, has been that no reasonable busing is offered by the school district to students living outside the catchment area,” said White, adding that carpooling isn’t a stable alternative and transit passes are too expensive. “I can say from personal experience that it isn’t affordable to pay for passes for both my kids.”

Currently, students from kindergarten to Grade 12 are charged $42 for a monthly pass, as are people over the age of 65. The regular monthly pass costs $60.

The best solution, said White, would be to offer free passes to youth under 18, as is done in Victoria. Other ideas included having the school district purchase tickets at a subsidized rate with funding from the province, creating a family pass, or lowering the youth monthly pass to $15.

A target start date for reduced fares should be Nov. 1, said White.

Three other letters from parents supported his request.

But staff resisted that timeline, since it would be out of step with a planned comprehensive fare review with BC Transit, which directors were expected to endorse at the meeting. According staff, the earliest a fare change could take effect is April 2020.

SCRD chair Lori Pratt asked whether they could get around that time constraint by introducing a pilot program, but staff said bylaws would have to change as would the operating agreement between BC Transit and the SCRD.

Sechelt director Darnelda Siegers pointed out that BC Transit doesn’t get revenue from fares and the SCRD has the discretion to change fares. “I’m wondering why this would require, then, a change in our operating agreement and why we would have to wait that long to implement it.”

Infrastructure manager Remko Rosenboom responded that BC Transit still has “a role to play as a partner in the system,” and they have experience when it comes to increasing ridership with fare structures, among other things.

Siegers replied, “I’d still like to see something move forward this school year. There’s an impact in this community.”

After some discussion, Siegers made a motion for staff to investigate how to implement a free or cheaper youth fare and family pass before the end of 2019, taking funding implications into account.

Gibsons director Bill Beamish had his own concerns about cost. “I think that’s something we really need to know before we say, ‘Yeah, let’s give everybody a free ride.’”

Ultimately, the motion was unanimously supported, as was the staff recommendation to move ahead with the more comprehensive transit fare review.

White, who was in the audience, thanked the directors for a “good response” to his letter.

Results from the fare review are expected to be brought to committee in the first quarter of 2020, and would include introducing an on-board electronic payment system similar to Vancouver’s Compass card, among other things.

Directors also voted on plans for transit expansion at the meeting.

They endorsed recommendations to research the feasibility of a new route through lower Gibsons, Langdale Terminal and Langdale, called Route 5, and to look into expanding service along Sechelt Inlet and into Sandy Hook and Tuwanek, identified by staff as a “quickly developing area.”

If they go ahead with that plan, it would be implemented in 2021 at the earliest. They are expected to review the feasibility report in early 2020.

At the same meeting directors also cleared staff to work with BC Transit to start the initial steps of updating the Transit Future Plan, a sweeping document that was published in 2014 to guide transit decisions on the Sunshine Coast for 25 years.

According to a staff report, BC Transit told the SCRD it “had staff resources available” to update the plan, which has become out of date.

For example, Route 5 was identified as one of the plan’s “short-term service priorities” and was supposed to be implemented within the first three years.

An outline for the update process, which would include public consultation, is also expected in early 2020.