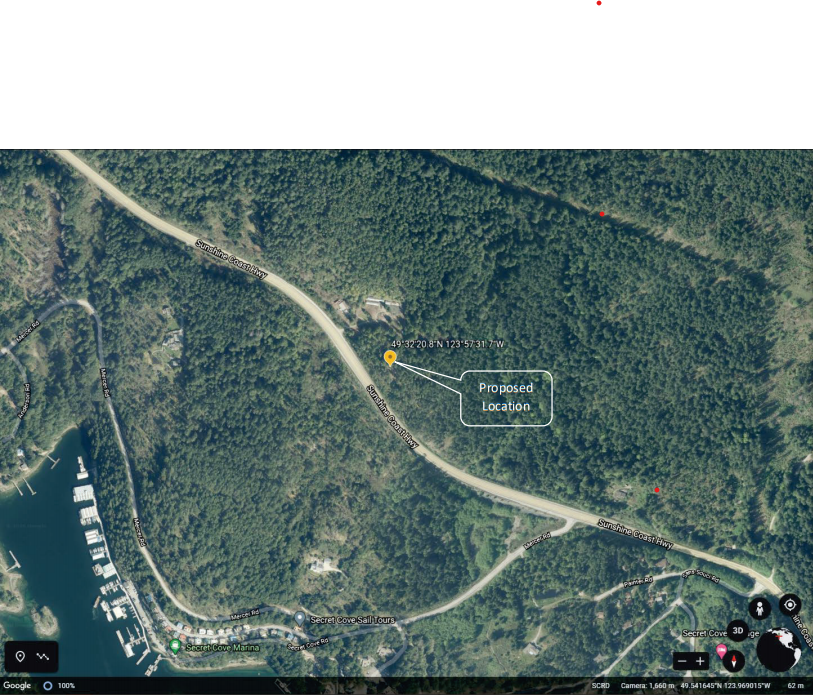 Telus proposed a modified location for a telecommunications monopole tower near Secret Cove, on a private parcel at 10264 Sunshine Coast Hwy.SCRD map

Telus’s latest round of applications have received the go-ahead from the Sunshine Coast Regional District (SCRD).

At a May 27 corporate and administration services committee meeting, the SCRD board provided concurrence for four applications for Telus telecommunications towers destined for the lower Sunshine Coast.

Senior planner Yuli Siao told directors the applications were similar to each other, with the purpose of improving wireless communications and rural internet service, which will also benefit emergency response.

The applications included locations near Secret Cove, at Curran Road in Halfmoon Bay, Ruby Lake and Lafarge Mine in Egmont.

The application for a communications tower near Secret Cove was modified from a previous plan that would have seen a 63-metre tower installed on Mercer Road.  That application was not supported by the Halfmoon Bay Advisory Planning Commission (APC).

In its modified application, the company put forward plans for a 31-metre-tall monopole on a private parcel at 10264 Sunshine Coast Hwy. near Secret Cove. The application describes the site as a mix of dense forest and cleared areas, and the majority of the monopole would not be visible. This version of the application was supported by the Halfmoon Bay APC.

Halfmoon Bay director Lori Pratt said she was happy to move the recommendation to grant concurrence to the Secret Cove location, but acknowledged some community members still have concerns.

“I will note that even though this is less contentious than the initial proposal, the Mercer Road site, I do recognize that there is still some contention around this site. However, it is more favourable to a larger segment of the population,” Pratt said.

The 5549 Curran Rd. location in Halfmoon Bay is on a private parcel on a 37-hectare property, and would be the site of a 60-metre tower. The heavily treed area is set back from surrounding homes, and the nearest home would not have a view of the tower, the application states. This application received no comments from the public.

At Ruby Lake, Telus requested land use concurrence for a 60-metre tower at either of two locations: Laverock Road or 15344 Sunshine Coast Hwy., also known as Ruby Lake Resort. The two sites are within 500 metres of each other, and both are on private parcels, close to the highway and would provide a densely forested area to screen most of the lower portion of the tower from view. Staff recommended either location.

There were 55 comments from the community, with the majority preferring the Ruby Lake Resort location. Concerns were raised about the visibility of the tower at about 300 metres away from the Iris Griffith Centre, and about visibility from residences near the Laverock Road.

After Area A director Leonard Lee said the Egmont/Pender Harbour APC was against the Laverock Road site, the SCRD chose to support the 15344 Sunshine Coast Hwy. site.

The fourth application from Telus at the May 27 meeting relates to a proposal near the Lafarge Mine in Egmont. The 45-metre tower would be on a private parcel on a 500-hectare (1,227-acre) property only accessible by boat.

Staff consider the site an appropriate location for its remoteness and dense forest. This application received no comment from the public, and received support from the Egmont/Pender Harbour APC.

All four recommendations to give land concurrence to the proposed Telus tower sites were adopted at the SCRD regular board meeting later that day.

The governing body responsible for approving the telecommunications towers is Innovation, Science and Economic Development Canada (ISED). The SCRD can only make recommendations and acknowledge consultation took place. ISED requires applicants to consult with the local government and the public.

The towers must then be constructed substantially in accordance with the submitted plans, and Telus must address any shíshálh Nation archeological or environmental concerns.