Telus is moving ahead with public consultation for several sites to improve wireless service on the Sunshine Coast.
Feb 16, 2021 4:04 PM By: Sophie Woodrooffe 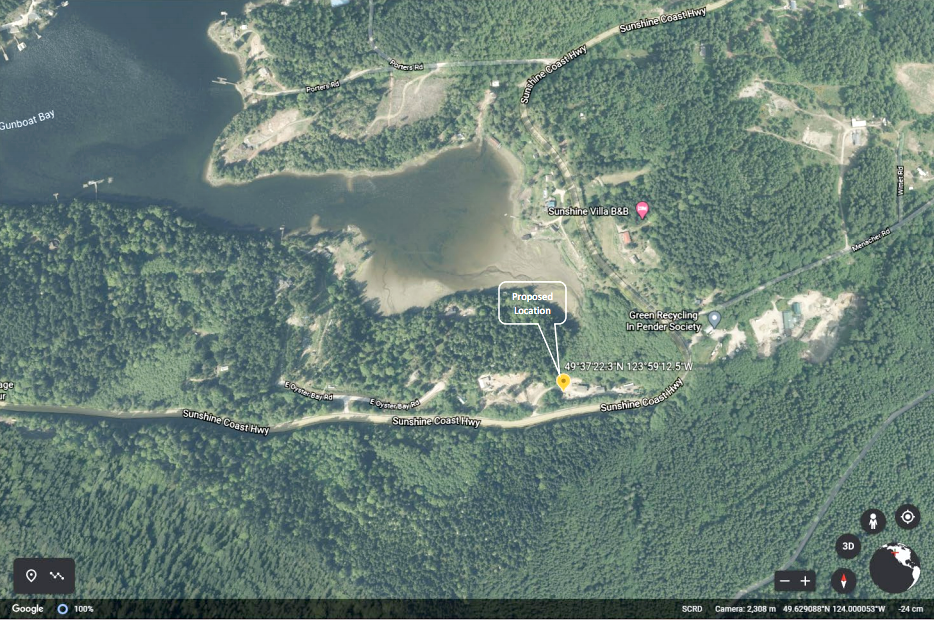 An image depicting the proposed site for a 60-metre Telus tower at 10264 Sunshine Coast Hwy. in Madeira Park.Image via SCRD

Telus is moving ahead with public consultation for several sites to improve wireless service on the Sunshine Coast.

The sites are located on Egmont Road, Ruby Lake, east of Pender Harbour and Secret Cove, according to a statement emailed to Coast Reporter from the company.

Telus had originally chosen Mercer Road as a location for a tower in the Halfmoon Bay area but proposed an alternative site at 10264 Sunshine Coast Hwy. in Secret Cove for the tower “after consulting with the community and listening to their feedback,” said the statement.

However residents remain concerned about the location.

A recommendation was made by the APC for Telus to continue exploring different sites or provide “a technical solution to provide maximal service to all areas involved.”

According to the APC minutes, members raised concern about the proximity of the tower to homes, including health concerns, its appearance from the highway “due to the increased height of 20 metres,” recognition that other areas such as around Trout Lake “are in greater need of improved service,” and they asked whether adequate polling had been completed to gauge residents’ desire for a tower.

The Egmont/Pender Harbour APC also weighed in on a proposed tower at Ruby Lake and a 60-metre tower at 13121 Sunshine Coast Hwy., meant to improve service for residents and businesses within a few kilometres of Madeira Park.

According to the minutes, the APC recommended approval of the 13121 Sunshine Coast Hwy. location, but asked that Telus “reasonably compromise on the tower location and to make it less intrusive by moving further from the sight line of the highway,” or relocating it further north to the industrial area by the Pender Harbour garbage and recycling depot.

SCRD directors were also expected to vote on whether to support the Madeira Park location at the Feb. 18 committee meeting.

As for the Ruby Lake tower, the APC also recommended approval, but asked that an alternative location be found away from the Iris Griffith nature reserve. Two letters were received opposing its location at the entrance of the reserve.

The APC recommended putting the tower 1.7 kilometres to the south on the highway, “as long as Telus could still provide the same or better level of proposed coverage.”

And in Egmont, which has been dealing with a chronic lack of service, Telus said operators have “recently installed small cells throughout the community which has greatly improved wireless service in town.”

Rather than applying for grants to support a private-public partnership, Telus is “currently moving forward with our own capital spending, and will be engaging the community to consult on all new cell tower proposals,” said Telus when asked whether the company had applied for federal grants to assist with project costs.

A cell tower the company is building in partnership with the SCRD at the Roberts Creek fire hall, meanwhile, is expected to be complete and operational by spring. Emergency response equipment is being installed as well, to improve the SCRD’s emergency response system.

“We also enhanced wireless coverage in the Sargeant Bay area in the summer of 2020,” Telus told Coast Reporter, “and built a new cell tower next to Narrows Inlet that has been providing new wireless coverage to the Sechelt Inlet since late last year.”

The SCRD supported that proposal in May 2020 for a 51-metre tower on an island at Cawley Point in Sechelt Inlet.