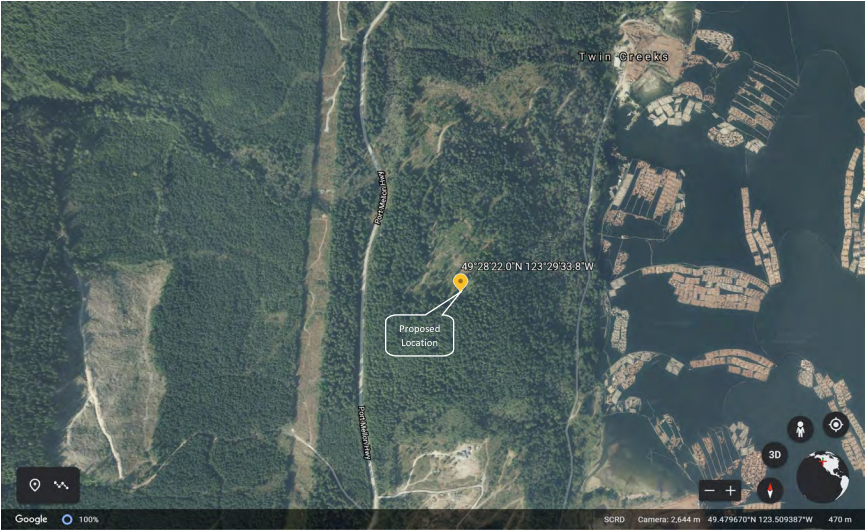 Proposed location of the Twin Creeks Telus TowerImage via SCRD

Emergency operations could soon improve with the help of a proposed communications tower on Port Mellon Highway.

At a planning and community development meeting on March 18, the Sunshine Coast Regional District (SCRD) gave local government concurrence to a 73-metre Telus communications tower on a private parcel near Twin Creeks, on Port Mellon Highway.

It is up to Innovation, Science and Economic Development Canada (ISED) to approve telecommunication facilities, but the ISED requires consultation with local government and the public. This proposed tower received no comments from the public, staff told directors, and the West Howe Sound Advisory Planning Commission gave a recommendation to approve the proposal.

Senior planner Yuli Siao told the committee that staff consider the proposed location for the tower to be appropriate. A staff report describes the area as a “large rural acreage that is heavily treed and surrounded by properties of forestry and industrial uses.”

“The general consensus is if you want to have cellphone service, you need towers. So that’s a fairly persuasive argument for these people,” Hiltz said. “It’s an industrial area, it’s not close to residents. It’s sort of almost a forgotten part of West Howe Sound, and there’s a lot of traffic.”

Gibsons director David Croal also gave his support for the tower location, although he was not a voting director on this item. He said improved service in the area could benefit people from a search and rescue perspective, as Gibsons SAR gets frequent calls from that area.

“The cell service is appalling currently,” Croal said. “We had a situation about 18 months ago where a family, their boat sank. They ended up on a log boom. Had the incident occurred 100 metres further, there would have been no cell reception. They were just lucky they had the reception.”