Logging activity hasn’t been the only point of friction between the principals of 0990199 B.C. Ltd. and neighbouring property owners.
Mar 19, 2019 2:53 PM By: Sean Eckford 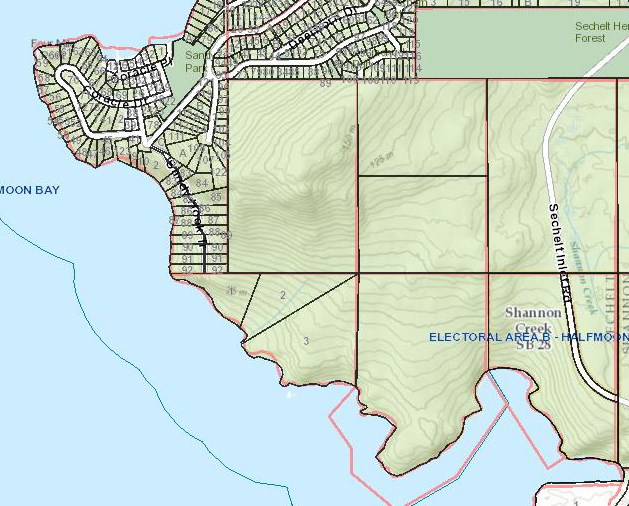 A map of Sandy Hook: The owners of the lots marked 1, 2 and 3 at the bottom left were involved in the court case against 0990199 B.C. Ltd., which owns the four large blocks surrounding them.SCRD GIS Image

Logging activity hasn’t been the only point of friction between the principals of 0990199 B.C. Ltd. and neighbouring property owners.

The owners of three waterfront lots went to court with the company over access to their properties via a road that runs through part of the land owned by the company, as well as a block owned by SSC Properties.

According to court documents, the three property owners had been using the road “to one degree or another… for many years in order to access their properties by vehicle to and from Sechelt Inlet Road,” even though it was not a public roadway.

Not long after 0990199 B.C. Ltd. bought the property, along with the neighbouring lots that are now Managed Forest 503, there was a disagreement and Kin Chung, acting for the company, blocked use of the road.

The group of waterfront lot owners petitioned B.C. Supreme Court to have the road declared either an “easement of necessity” or a public right-of-way, arguing in part that although the lots were classified as water access only when they were purchased, it’s not safe or practical to get to them by boat year-round.

The lot owners were able to come to an agreement with SSC over the part of the road that crosses its property, but a judge ruled 0990199 B.C. Ltd. is within its rights to restrict access to the other parts of the road.

In his ruling, handed down last August, Justice David Crossin said the waterfront lot owners failed to meet the burden of proof to show necessity and that “there is no evidence before me that [Sechelt Inlet] is functionally un-navigable or otherwise unusable.”

He also ruled there was no evidence the road had been dedicated for public use by any of the previous owners. “The evidence discloses members of the public were sporadically on the road from time to time over the years, but there is no evidence that the public used the subject road in any meaningful sense. It was, to the outside world, a private road,” Crossin wrote in his decision.

Crossin also rejected the request for an injunction to allow the waterfront lot owners to continue using the road until another option could be negotiated.

Since the ruling came down, the property owners have been either accessing their lots via boat or use a trail in the area that follows a Sunshine Coast Regional District water line but does not accommodate vehicles.

The District of Sechelt has a right-of-way in the same area, but said it has no plans at this time to develop it.