Two orphaned black-tailed deer fawns from Roberts Creek have been rerouted to a wildlife rehabilitation centre – with the intent of eventually releasing them back to the wild – after spending two weeks with a company that trains animals for televisio
Jun 3, 2020 4:11 PM By: Sophie Woodrooffe 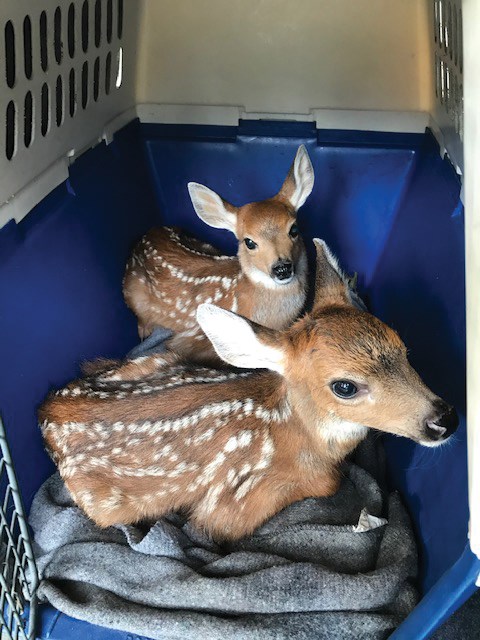 Two orphaned fawns found in Roberts Creek are now in the care of Critter Care Wildlife Society in Langley.

Two orphaned black-tailed deer fawns from Roberts Creek have been rerouted to a wildlife rehabilitation centre – with the intent of eventually releasing them back to the wild – after spending two weeks with a company that trains animals for television and film.

The Conservation Officer Service (COS) captured the deer on May 19 after a doe was killed by a cougar on a waterfront property in Roberts Creek. At the time, it was reported that a wildlife biologist was contacted and the deer were placed in possession of Beyond Bears, an Abbotsford business that trains animals for film and television. It’s permitted under the Wildlife Act to possess and transport live wildlife for filming purposes.

Fox’s association filed a complaint with the COS on May 29, claiming it was “highly inappropriate for a conservation officer to exercise the property rights of the B.C. Government and give live animals away to a private company.”

In a release, Kelly said it was a mistake that “the film industry took priority over any rehabilitation efforts.”

On June 2, an official from the Ministry of Forests, Lands and Natural Resource Operations (FLNRORD) responded to a request from Coast Reporter about the incident.

According to the statement, after the COS captured the fawns, FLNRORD staff contacted Beyond Bears, which took possession of the fawns from the COS.

“After further discussions, the fawns are being sent to a wildlife rehabilitation facility with the goal of eventual release back into the wild.”

A follow-up statement by FLNRORD explained that, “given the good record and previous experience of the company, it was considered to be a good recipient for the orphaned fawns in Roberts Creek, but no final decision had been made.” The ministry decided to relocate them “after reviewing all available information.”

Both Ready and Fox said they were thankful the COS responded by moving the fawns.

“The fact that they acted so quickly to reroute the deer to get them into proper care is really important,” said Fox. “They recognized this situation wasn’t in the best interest for these animals, nor the public of B.C. and they quickly corrected the mistake.”

Ready said it was “nice to see that we can work with the COS for the collective good of wildlife and wildlife habitat.”

Fox said she remains concerned “about potential conflict of interest and potential inappropriate relationships” between private companies and FLNRORD.

“Wildlife are held in trust by the people,” said Fox. “We don’t give wildlife to for-profit companies.”

The fawns are now in the care of Critter Care Wildlife Society in Langley.

Beyond Bears did not respond to Coast Reporter’s request for comment in time for deadline.