The federal department overseeing Indigenous services has responded to its provincial critics, pointing out that Ottawa transfers housing funds to shíshálh Nation under the band’s self-government agreement and that shíshálh Nation is eligible for add
Jan 7, 2021 11:45 AM By: John Gleeson 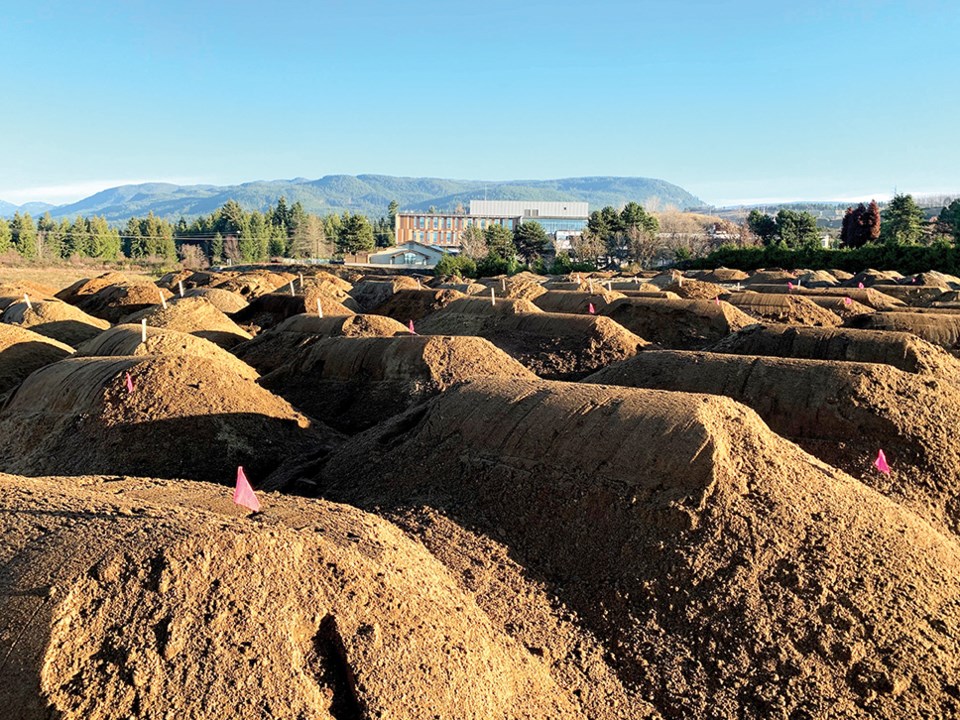 Flagged piles of excavated material for archeological review across the highway from the Our House of Clans construction site. The excavated earth totals about 7,000 cubic metres, which archeology firm In Situ has meticulously flagged and will be screening for artifacts. All results are submitted to the Nation directly and there is no timeline on how long the process will take, according to tsain-ko’s director of projects, Jason Jenkins.Submitted Photo

The federal department overseeing Indigenous services has responded to its provincial critics, pointing out that Ottawa transfers housing funds to shíshálh Nation under the band’s self-government agreement and that shíshálh Nation is eligible for additional federal funding for housing but has not applied for it.

B.C. Attorney General and Housing Minister David Eby raised the issue last month as part of an announcement that work had started on the Our House of Clans project. BC Housing contributed $6.8 million to the project through its Indigenous Housing Fund.

Saying projects of this kind fall under federal responsibility, Eby blasted Ottawa for its “ongoing neglect and delay related to on-reserve housing” in B.C., calling it “an embarrassment for British Columbians and a barrier to reconciliation.”

In a Dec. 23 emailed response to Coast Reporter from Indigenous Services Canada, spokesperson Rola Tfaili acknowledged there are “longstanding housing gaps that exist in Indigenous communities” and said the department recognized the B.C. government’s “partnership and shared interest in supporting housing for First Nations on-and-off reserve.”

But, Tfaili continued, “shíshálh Nation has been self-governing since 1986 and has capital/housing funding included in their Financial Transfer agreement.

“There are currently no pending applications from shíshálh Nation.”

In follow-up response, the agency said the New Approach program is a modified version of the Indigenous Services Canada housing program and was initiated in 2014.

The Transfer Agreement includes a lump sum provided by Canada to support “many programs and services” covered in the agreement, and the Nation has full spending discretion.

The Our House of Clans project is expected to be completed by late spring 2022.

– with files from Sophie Woodrooffe