Questioners at a Jan. 28 online public engagement session about the Coopers Green Hall replacement project in Halfmoon Bay wanted to know about financing, the effect on property taxes, and the fate of the adjacent boat ramp.
Feb 1, 2021 4:49 PM By: Rik Jespersen 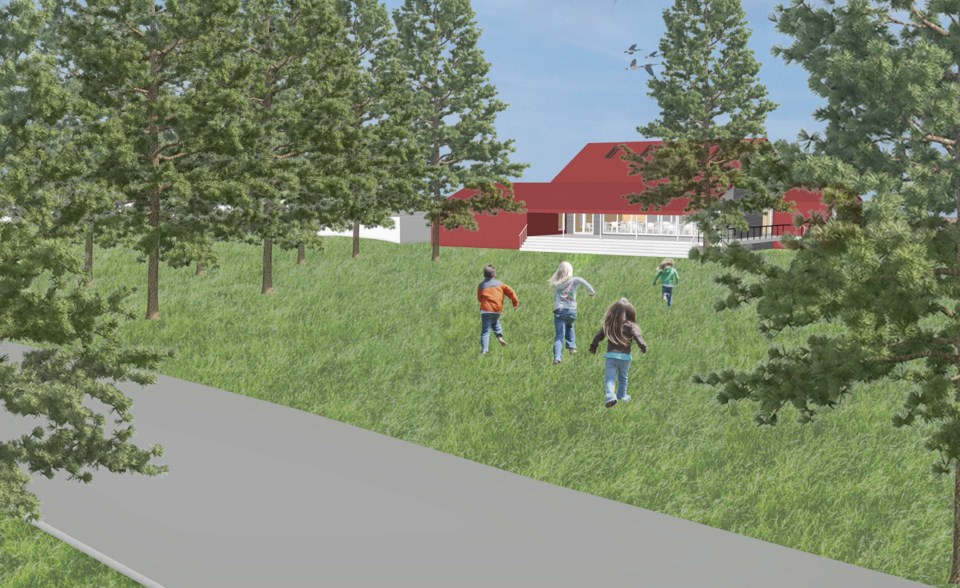 Preliminary designs of the Coopers Green replacement hall by Principle Architecture were unveiled at an open house on March 15, 2018.PRINCIPLE ARCHITECTURE GRAPHIC

Questioners at a Jan. 28 online public engagement session about the Coopers Green Hall replacement project in Halfmoon Bay wanted to know about financing, the effect on property taxes, and the fate of the adjacent boat ramp. But the most-asked questions from the 69 participants concerned the Sunshine Coast Regional District’s (SCRD) recent decision to reconsider proceeding with the project at Coopers Green Park.

On hand to respond were Ian Hall, SCRD general manager of planning and community development, and architect Craig Burns, of Principle Architecture, the firm that designed the proposed new building.

The $3.1-million project would replace the 100-year-old Coopers Green Hall on its current footprint in the park near the west end of Redrooffs Road. Hall noted in his opening remarks that the SCRD has secured a federal grant for the project of just more than $2 million. Hall added that the Halfmoon Bay Community Association (HBCoA) so far has raised $344,000 in donations, and a further $200,000 would come from independent power projects. An assumed funding gap of $500,000 to $800,000 would have to come from the SCRD, Hall added.

“Since this (planning process) has been going on since 2015 … I’m wondering what the motivation is for the SCRD now to be considering another location,” one participant asked.

“This is a significant project,” Hall replied, “and the SCRD doesn’t get the opportunity to invest in new facilities very often. Anytime we go into a big project like this, we want to make sure that we are making the best step forward that we can for the community, knowing that we’re working with public resources.”

Because the money raised by the HBCoA was specifically for a new hall at Coopers Green Park, another participant asked, wouldn’t the funds have “to be legally returned to donors” if a new hall was built at another location?

Hall replied that the regional district “respects and understands the limits of the agreement for fundraising for the hall,” and acknowledged that “the process of engaging all the donors would be a complicated exercise.”

Hall was also asked if the $2-million federal grant would still be applicable to a new community hall built elsewhere in Halfmoon Bay. Hall agreed that was an open question and “potentially, there would be additional study required to prove the feasibility of another site.”

The boat ramp adjacent to Coopers Green Park is considered essential for recreational and commercial users and is relied on by residents of Thormanby Island and other islands off that part of the Coast. Hall acknowledged there have been issues due to heavy use of the ramp and that management of it was being reviewed, but said it is not part of the new hall project. He added that surface improvements will be made to the ramp as part of a separate community parks initiative.

As to the effect of the currently proposed project on taxpayers, the unfunded financing gap of $500,000 to $800,000 would have to be filled by a loan to the SCRD, Hall said. That loan would have to be repaid through property taxes in the regional district’s rural electoral areas. He said that at current interest rates, it would amount to an annual increase in property taxes of between $1.30 and $2.87 per $100,000 of assessed property value for the five-year life of the loan.

Hall added that, “As the project has advanced, and especially as the grant funding was confirmed, offers of in-kind donations have been received. This has a significant potential to assist with the project.” He also noted that the HBCoA has proposed to take on operating responsibility for the hall, “which could offset future costs to SCRD taxpayers.”

Hall said a staff report based on this engagement session and on the results of an online questionnaire will be presented to the SCRD board later in February. During budget discussions in March, he said, “the board may decide to proceed with the project on the basis of a given location at that time, or they may take another decision.”