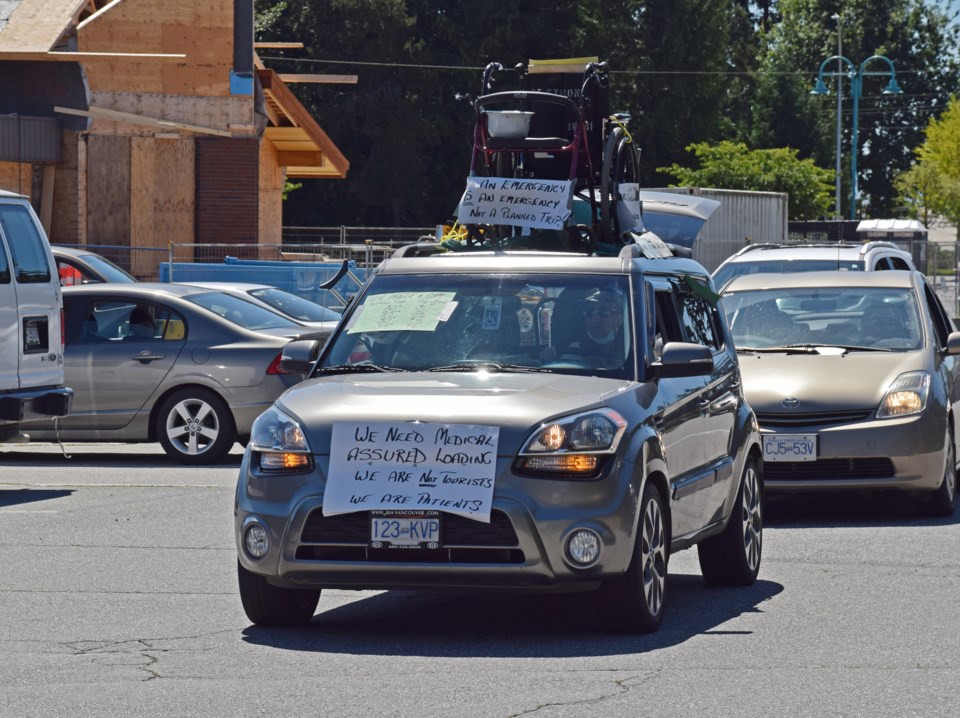 A handful of frustrated BC Ferries users, led by Mar-Lynn Church, paraded through downtown Sechelt on July 26 to call for guaranteed boarding for people travelling for medical appointments, a permanent resident priority system and improvements at the terminals so people stuck with long waits can access washrooms, shade for their pets, and other essential services.Sean Eckford Photo

BC Ferries CEO Mark Collins says BC Ferries wants to see the resident priority loading, as it’s being implemented right now under a provincial order, “ended as soon as possible.”

He also said that moving to year-round, two-ferry service to the Coast is on hold.

Collins made the comments to Sechelt and District Chamber of Commerce members who’d come together both online and in person July 27 for what the Chamber described as its first “hybrid” luncheon.

In a 90-minute presentation and Q&A that went deep into some of the traffic data for the Langdale-Horseshoe Bay route, Collins said the trends since B.C. entered Phase 3 of its restart plan are very similar to a typical summer, although the absolute numbers in terms of ridership remain down about 30 per cent from last year.

Collins said despite what a lot of travellers have been experiencing, BC Ferries is running enough sailings on the route to give the company about 27 per cent more capacity than it needs to meet demand.

“Slack capacity does not mean sailings don’t sell out, of course, as you’ve all experienced,” Collins said. “Popular sailings sell out as they have every year and they do every summer on every route. But it does mean that capacity does exist and is available to provide space for travellers at some point in the travelling day.”

The current summer schedule, which Collins said is unlikely to change, is based on eight round trips a day, with the Queen of Coquitlam on for a limited number of extra weekend sailings.

“We simply don’t have the crew to sail the Coquitlam five days a week like we did last year… So we’re making do with the crew that we have.”

Collins said the immediate impact of the pandemic meant BC Ferries couldn’t go forward with its normal summer hiring.

“Now that traffic is back and we could actually have meaningful work for those 400 employees, it’s too late for this summer. It takes between six and 12 weeks to train a seasonal [employee],” Collins said. “If we were to hire all those people right now, they’d become available just about October, which is of course too late for the summer.”

Collins was asked several questions around priority boarding for Sunshine Coast residents and those travelling for medical appointments.

According to Collins, the existing ministerial order that calls on BC Ferries to give priority to residents during the public health emergency is “extremely vague” and was instituted with no consultation with ferry operators.

“Our position is that resident priority loading [under the ministerial order] should be brought to an end as soon as possible. And we have reached out to the government with that point of view.”

BC Ferries has been encouraging people to use reservations to avoid congestion at the terminals, but Collins said on Fridays, Saturdays and Sundays between July 1 and 21, anywhere from 20 to 40 per cent of the travellers who’d made reservations for sailings after 3 p.m. were “no shows.”

“We all know the stories about people making multiple reservations and then using the one that works. We get that, but it does have a negative impact on the travel experience of other users,” Collins said.

Collins also said that while BC Ferries expects to be back to 2019 service levels on Route 3 next year, the plan for year-round, two-ship service for the Sunshine Coast is on hold because the province did not agree with BC Ferries’ request to include a second ship for Langdale-Horseshoe Bay in the new contract and the Ferry Commissioner’s decision on fares “did not support investment” in the fifth of the new major route ships BC Ferries is hoping to build in the coming years.

“Even the four ships we were proceeding with are now on hold because of the financial situation,” he said. “We’ve got to really look hard at the Queen of Surrey and the Queen of Coquitlam and engage with the community [on] how can we use those assets, the assets we know we have, to get to a ferry system that works for everyone.”

BC Ferries has also put capital projects such as the Langdale terminal upgrade on hold.

Collins said BC Ferris is planning public engagements on the Coast in the coming weeks.

“We’re going to need to face it, both the community and BC Ferries... The capacity we have today [is] the capacity, we’re going to have in the future,” Collins said. “This Coast needs more capacity, and the capacity is not going to change anytime soon so we need to come up with smarter, better, faster ways that we can get throughput through the existing infrastructure.”

Sechelt council calls on province to push for BC Ferries service improvements
May 6, 2021 5:42 PM