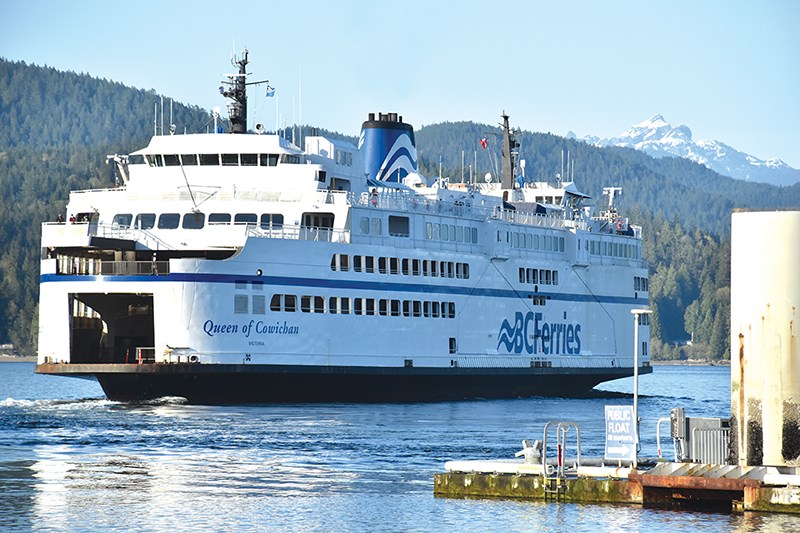 Queen of Cowichan departs Langdale on April 20. BC Ferries is proposing a summer trial system on Route 3.Sophie Woodrooffe Photo

BC Ferries is proposing to increase how many vehicle reservation spots are available onboard Route 3 this summer in an effort to reduce wait times and congestion at terminals.

Under the company’s proposal, reservations would also be free and one-way vehicle fares would be paid in both directions at Langdale and Horseshoe Bay by those who do not have a reservation. Currently, fares are only charged to sail from the Horseshoe Bay terminal.

On April 22, Brian Anderson of BC Ferries was scheduled to present the proposal to the Sunshine Coast Regional District (SCRD) board. Ahead of his presentation, Anderson told Coast Reporter, “People are paying a return fare. Vehicles are paying a one-way fare.”

During the trial, the payment for passenger fares, including for walk-on, drivers and vehicle passengers, would be “the same as the current practice that you pay a return fare for passengers out of Horseshoe Bay. In this situation, in order to expedite travel out of Langdale, we’re proposing to continue that practice. So the passenger fares are paid for out of Horsehoe Bay as a return.”

If a trial goes ahead, reservation capacity for vehicles would increase to 95 per cent during the peak summer season, according to the presentation in the SCRD meeting agenda.

The remaining five per cent capacity will not be able to be reserved, Anderson said, as it will be held for priority emergency services and the Medical Assured Loading (MAL) program.

Those travelling with the Medical Travel Assistance Program (MTAP), but without a MAL letter, would have to book and pay in advance, then the fare would be refunded at the terminal. BC Ferries says it is working on modifying its website to allow MTAP bookings without advance payment.

Customers will be able to reserve up to 45 minutes before sailing, space permitting.

Personal vehicle fares would be paid in full at the time of booking, with no reservation fee, and range from $14.50 to $25 for each direction.

Reservation fees are currently $10 when booked more than a week in advance or $17 within seven days each way.

No-shows would face a penalty fee.

Without a reservation, travel in each direction would be $33.

The current fare for a vehicle is $47 round-trip, BC Ferries executive director of public affairs Deborah Marshall told Coast Reporter via email. “So in comparison to the prices in the table, for one way fare [the] current rate is $23.50.”

Anderson told Coast Reporter that BC Ferries encourages everyone to book in advance, if possible. “It gives you access to lower fares. Everyone who books in advance pays less under this model.”

Other cost changes during the trial would include discounts for travel at less busy times.

Changing the reservation system for Route 3 was included in the 11 community-sourced ideas that came out of company’s public consultation earlier this year. The trial proposal to the SCRD says, “BC Ferries believes this new approach will provide travel certainty and reduce congestion on roads… Customers now wouldn’t need to arrive hours early in the hopes of being able to travel.”

Diana Mumford, the chair of the Southern Sunshine Coast Ferries Advisory Committee (FAC), told Coast Reporter that the FAC was given the same presentation the week before.

“I think the 95 per cent’s going to be a tough one for a lot of people to swallow,” Mumford said. “I think that probably will be the most challenging piece of it, and for people that are commuters or have medical reasons to travel.”

She said the FAC agrees Route 3 needs improvements, but the trial did not receive unanimous support from the committee. Mumford said there are concerns for travellers with MTAP, as the presentation only notes there will be saved reservations for the MAL program.

“If somebody gets that appointment suddenly in the city, how are they going to get a reservation if it’s a busy time?” Mumford said, noting that between 2,000 and 3,500 MTAP passes were used on Route 3 on a monthly basis pre-pandemic.

As for the Langdale terminal being able to accept one-way vehicle payments, Mumford said she anticipates that’s where passengers will notice the biggest change, when drivers show up without a reservation and have to pay at the terminal. She also raised a concern that processing payments at the Langdale terminal could have a significant impact on traffic.

“But I don’t think ... making it one-way each way will be as confusing for people as the rest of it, of having to make reservations to get on the ferry,” Mumford said.

As for whether the trial will increase travel certainty, Mumford said that would depend as “there’s all kinds of devils in the details.”

BC Ferries is looking for support from local governments, including the SCRD, ahead of the peak summer season. If the trial is endorsed, BC Ferries will communicate upcoming service changes to the public via the media, its website and social media channels, and the trial will begin this summer. BC Ferries would collect feedback throughout.