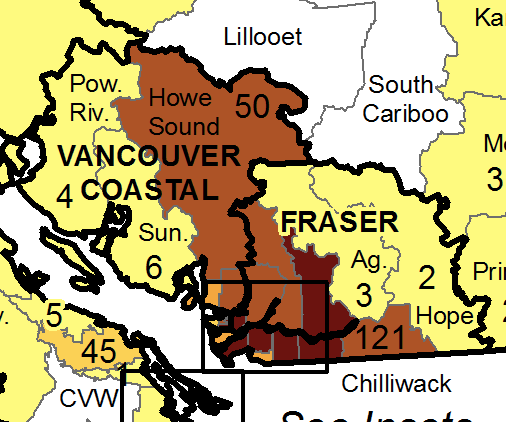 A map showing COVID-19 case counts between April 18 and 24.Image via BCCDC

Six cases of COVID-19 were confirmed on the Sunshine Coast last week, according to data released by the BC Centre for Disease Control (BCCDC).

Those new cases were identified between April 18 and 24. The week before, five people tested positive for the coronavirus, down from 13 from April 4 to 10 – the highest count since mid-January.

Four cases were confirmed in Powell River between April 18 and 24.

The Howe Sound region experienced a precipitous drop to 50 confirmed cases last week from 131 and 337 the two weeks prior, respectively.

That region includes Whistler, where cases have been persistently high, but vaccination efforts targeted at a broader population in the area appear to be making a dent in transmission.

“This can be attributed, in part, to the week-long vaccination program Vancouver Coastal Health (VCH) held in Whistler for all residents who have a primary residence in Whistler or who work in this community," VCH said in an information bulletin Thursday.

There’s a one-week delay in data provided for local health areas, and the trend of lowering case counts appears to apply provincewide, at least for April 30.

That comparatively low total was a good way to end April, which was a month that saw the province hit multiple all-time highs for the number of cases in a 24-hour period, including 1,293 cases detected on April 8.

As for vaccinations, B.C. received 138,000 doses of the Pfizer vaccine earlier this week.

The size of next week’s shipment, however, is set to double, and remain at 276,000 doses each week through the end of May. As such, the province is expected to get more than one million doses of the Pfizer vaccine by the end of May, provincial health officer Dr. Bonnie Henry said at an April 30 media briefing.

– with files from Megan Lalonde and Glen Korstrom