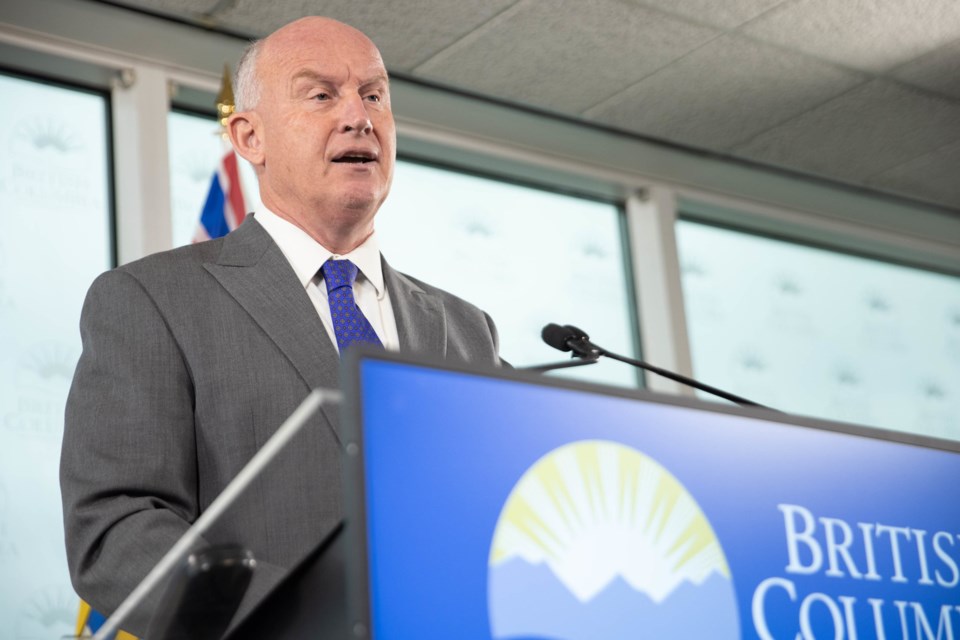 Public Safety Minister Mike Farnworth stuck with a decision not to legally restrict non-essential travel to the Sunshine Coast and Sea-to-Sky areas when questioned about it during an April 30 media briefing.

Farnworth shared more details about enforcement of an Emergency Program Act order restricting travel between three regional zones, which came into effect April 23, but didn’t announce any changes to those zone boundaries.

“The travel advisory is still in place. Don’t travel to those areas, even if you live in the Lower Mainland,” said Farnworth Friday when asked why rules around travel to the Sunshine Coast and Sea to Sky haven’t changed despite concerns expressed by political leaders and the public.

“The advice that Dr. Bonnie Henry has given is in place. If there needs to be changes, then obviously we would work with the provincial health officer, if additional measures need to be taken,” he said. “Obviously, we’re going to be monitoring the situation.”

At an April 29 media briefing, provincial health officer Dr. Bonnie Henry also acknowledged concerns over the potential for travellers to head to the Coast, since hospitals in smaller communities don’t have capacity to carry an additional burden.

“For people who live in the Lower Mainland zone and may have a second home or be planning an escape to the Sunshine Coast or Sea-to-Sky corridor, I am asking you to stay away right now, on behalf of those communities,” she said.

“Leaders in those communities are telling us they are not ready for an influx of additional people in the coming weeks.”

Between now and the end of the Victoria Day long weekend on May 24, “we need to give them a break by staying away,” she said.

Powell River-Sunshine Coast MLA Nicholas Simons defended the province’s decision after the April 30 briefing, telling Coast Reporter the notion that Lower Mainland residents may flock to the Sunshine Coast because they can’t go anywhere else may not be “entirely accurate.”

“We’ve seen a drop in traffic,” he said. “The vast majority of people are respecting the rules.”

The Sunshine Coast has achieved a higher vaccination rate than the provincial average, he said, adding while the Sunshine Coast is unique, he believed border delineations were established “for simplicity.”

“I hope people continue to just practise the health guidelines that have kept us relatively safe so far,” he said.

Both Sunshine Coast mayors and the regional district chair expressed their concerns directly to Farnworth earlier in the week about leaving the Sunshine Coast, which is lumped in with the Fraser and Vancouver Coastal Health (VCH) zone, open to non-essential travel.

Gibsons Mayor Bill Beamish issued a public statement April 27 calling on the minister to “rethink” keeping ferries to the Sunshine Coast open for non-essential travel, calling the decision “extremely unfair,” since it could leave the area vulnerable to people “who will be tempted to take advantage of more lax travel restrictions on Sunshine Coast ferries.”

At the Friday briefing, Farnworth said “people are getting the message,” since ferry travel has been down since the order was enacted – 25 per cent for vehicle traffic across the fleet last weekend on top of reduced levels during the pandemic, and 30 per cent for foot passengers. “That speaks volumes,” he said.

There have been more than 5,000 BC Parks cancellations and rebookings since the order came into effect.

“Travel spreads transmission,” said Farnworth, and that’s why the travel restrictions were put in place. “We know in particular in the Lower Mainland there are a number of hot spots and we have seen the growth in variants, and so that’s what this is about.”

He also confirmed BC Ferries is not enforcing the travel ban but is screening passengers on routes affected by the order, and that the system has “been working very well.”

He said if an issue arises where BC Ferries believes police attendance is required, calls are made to the RCMP on Vancouver Island, West Vancouver or Delta police, depending on the route.

“They have a protocol and system in place and they notify the police and the police respond very quickly,” said Farnworth.

Under the order, people are required to stay within the combined Northern and Interior Health, combined VCH and Fraser Health, and Vancouver Island regions until May 25, unless travelling for essential reasons.

Effective April 30, police will use “counter attack-style road checks” to enforce the order. Road checks can be set up on highway corridors connecting different regional zones, but they won’t be established in downtown Vancouver or on Boundary Road on the Lower Mainland.

Police may ask for the driver’s name, address, driver’s licence and secondary identification, and the purpose of the driver’s travel. Documentation regarding travel will not be required. Passengers are not required to provide information about travel.

If police have reasonable grounds to believe that a person has travelled for a non-essential purpose, they can direct the traveller to turn around and leave the region.

Failure to comply with requirements at a road check or direction given by a police officer could result in a $230 fine and travellers could face a fine of  $575 for violating the order.

More information about what constitutes essential travel can be found here: https://news.gov.bc.ca/releases/2021PSSG0031-000793

Ferry traffic down over a third in Horseshoe Bay as travel restrictions take hold
Apr 26, 2021 2:30 PM