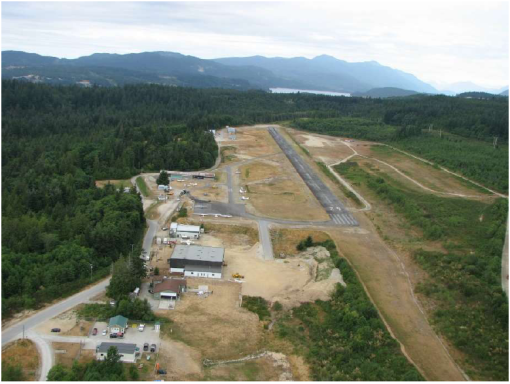 Despite concerns over costs related to lighting and potential overruns, Sechelt council has voted to award Jakes Construction of Chilliwack with a $2.7-million contract to proceed with the long-anticipated expansion of the Sechelt airport.

The project will be substantially completed by July 31, with “total completion” anticipated by the end of the year, according to a Feb. 17 council report on the contract award.

The runway will be extended by 214 metres to 945 metres. Resurfacing will be completed for 731 metres, and a taxiway and apron will be resurfaced, in addition to earthworks to create a 40-metre “safety margin” on either side and other modifications, requiring at least 3,000 truckloads of earth.

The total project cost of $3.2 million is more than double the original $1.4-million estimate – due to engineering assessments completed in 2019 that revealed a need for additional earthworks, the inclusion of GST as part of the grant application and project estimate, and an increase in the Jakes Construction bid itself.

That amount will be paid for with two grants from the BC Air Access Program and the remainder – $796,234 – will come from Gas Tax funding through the district’s Community Works Fund.

When the project was tendered in 2020, Jakes came in as the lowest bidder at $2.6 million, which still “significantly” exceeded available funding at the time, triggering the need to apply for a second grant.

The second grant was secured later that year but the Jakes estimate has since grown by $93,105, due to increased costs for labour, materials and equipment, and required COVID-19 protocols and procedures. At $2.7 million, the company still remains the lowest of the qualified bidders, according to the report.

For lighting, $30,000 is needed to re-install existing lights and to extend them to the length of the runway, using volunteers. “Advanced lighting systems” may also be explored if it can be covered by the project funds, said the report.

In his presentation, Bandara said consultants Associated Engineering advised another $600,000 would be needed to design and install an updated and compliant advanced lighting system.

The $600,000 estimate for lighting was an immediate point of contention at the meeting, with Coun. Eric Scott calling the figure “out of whack,” saying the airport committee’s pricing estimated the cost of improved lighting would be under $200,000.

Scott made a motion for staff to research lighting costs, requirements and possible funding sources.

Coun. Matt McLean asked about grant funding for lighting. Bandara said no other possible funding source has been identified.

Coun. Alton Toth asked whether the amount in the contract was fixed. “I’m personally a little terrified of cost creep and escalations,” he said. “I just want a little certainty that other than the lighting, this is what we’re in for and we’re not expecting any overruns.”

Staff said the contract isn’t fixed but a conservative estimate and contingency should mitigate financial risks.

Before council voted unanimously to award the contract, McLean said while he wasn’t “a huge fan” of using about $800,000 from Gas Tax funds for the project, based on the grant requirements, the district wouldn’t have been able to access the provincial funding without proposing to extend the runway rather than simply resurface it.

Public consultation, as required by Transport Canada, was completed in December 2020, and consultants Associated Engineering are preparing a report on public input.

As part of the presentation, Bandara said the district received “mixed responses” to the project.

While the majority of respondents supported the expansion (74 per cent), residents of Roberts Creek and Sechelt raised concerns about noise pollution and air traffic. Others expressed concerns about cost, infrastructure investment, greenhouse gas emissions and other environmental impacts.

In total, 106 comments, including 35 letters from the Airport Expansion Committee and group letters, were received – about half of which expressed support for drag racing, specifically, which uses the site for its seasonal events.