Sechelt council is asking the Sunshine Coast Drag Racing Association (SCDRA) to wait until the district has more details on the runway expansion project before confirming dates for the 2021 season. SCDRA representatives appeared before council Nov.
Nov 14, 2020 6:31 AM By: Sean Eckford 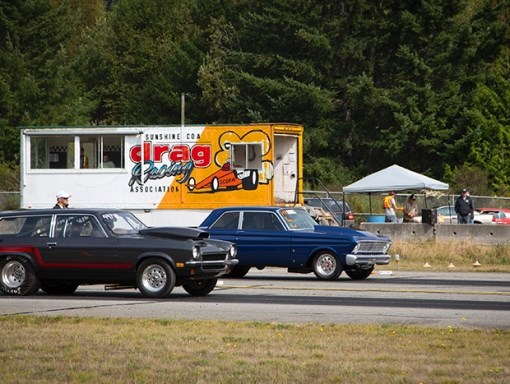 Sechelt council is asking the Sunshine Coast Drag Racing Association (SCDRA) to wait until the district has more details on the runway expansion project before confirming dates for the 2021 season.

SCDRA representatives appeared before council Nov. 4 to propose five race days in May, July and August of 2021, with a date in early September as a backup in case any of the other race days need to be cancelled.

Drag races have been held at the airport on Field Road since 1999 and in a letter to council the SCDRA said, “Allowing the SCDRA to use of the airport facility has proven very beneficial to our members and the citizens of the Sunshine Coast.”

The 2020 season was run under COVID protocols approved by Vancouver Coastal Health (VCH) and the SCDRA’s Richard Austin told council both the club and VCH were pleased with how it went.

The district, which owns and operates the airport, is planning to construct a 213-metre (700-ft.) extension to the existing runway. As part of the federal regulations governing aerodromes, the district needs to allow for public and stakeholder input until Dec. 14.

It’s also still awaiting confirmation of an additional provincial grant that would help cover the $3.2-million cost of the project.

But until the second grant is confirmed and the public input period is over, district staff aren’t in a position to advise council on whether the proposed drag race dates can be accommodated.

Sechelt’s goal of one day bringing the airport up to a standard that will allow scheduled passenger service already means the long-term future of drag racing on the airstrip is doubtful.

“We don't have a business plan that’s going to work at any location other than the airport,” Austin told council. “I would say if we aren’t able to continue at the airport, that’s probably the end of drag racing on the Sunshine Coast.”

Austin said the SCDRA estimates the cost of building a drag strip would be “in excess of a million dollars.”

Coun. Matt McLean said he’s keen to make sure that drag racing continues at the airport location, if not on the actual runway.

“I think these are great events for our community,” said McLean. “I just don’t want us to give up on it, because it is a really unique site that’s perfectly suited for drag racing, aside from the issue of the conflict with the airport and the use of the runway.”