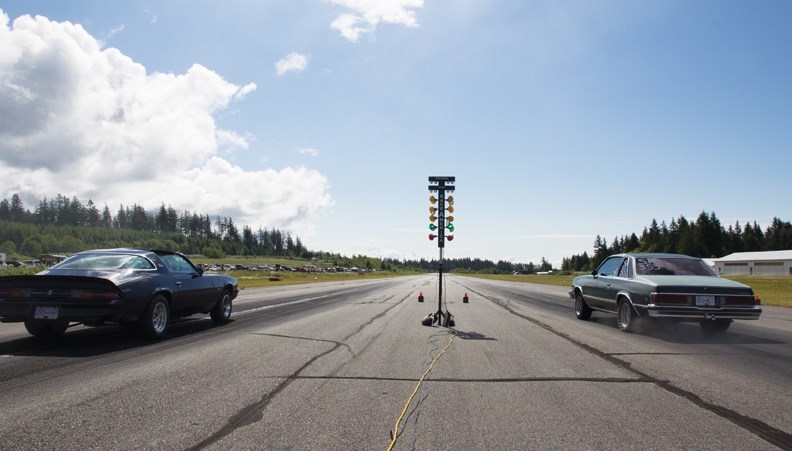 A race unfolds at the Sechelt airport in 2016. Jacob Roberts Photo

An imminent expansion of the Sechelt airport this summer is paving the way to uncertainty for the Sunshine Coast Drag Racing Association (SCDRA) as it appeals to council for time on the asphalt.

On Feb. 17 council awarded a contract to Jakes Construction to expand the Sechelt Airport.

A construction schedule isn’t available yet but the project, which will put the runway the association needs out of commission, is expected to be largely completed by July 31.

Manager of engineering services Sanath Bandara said there would be a “maximum” two to three week interruptions of airport activities.

The SCDRA has asked council for authorization to use the airport on six days between May and August 2021, including an alternate day in case one event is rained out.

In a letter submitted last October, the SCDRA said the use of the airport for its 75-member society “has proven very beneficial to our members and the citizens of the Sunshine Coast.”

Councillors were unable to provide certainty to the association, however.

At the meeting Coun. Eric Scott said while he sympathized with the group’s request, council should wait to approve dates until a construction timeline is provided.

Scott said he preferred not to reject their request outright but to meet with them to find out their planning needs before making a decision.

“It might not be a full blown event but maybe at least they could get out there and do some runs some weekend on shorter notice,” he said.

That meeting has been tentatively scheduled for March 10.

Councillors voted unanimously to defer a decision until after that meeting takes place.

The staff report also said discussions have been underway at council and airport development select committee meetings “about whether the resurfaced runway will be suitable for drag racing use,” but the issue wasn’t broached by councillors on Feb. 17.

Drag Racing events have been held at the airport since 1999.