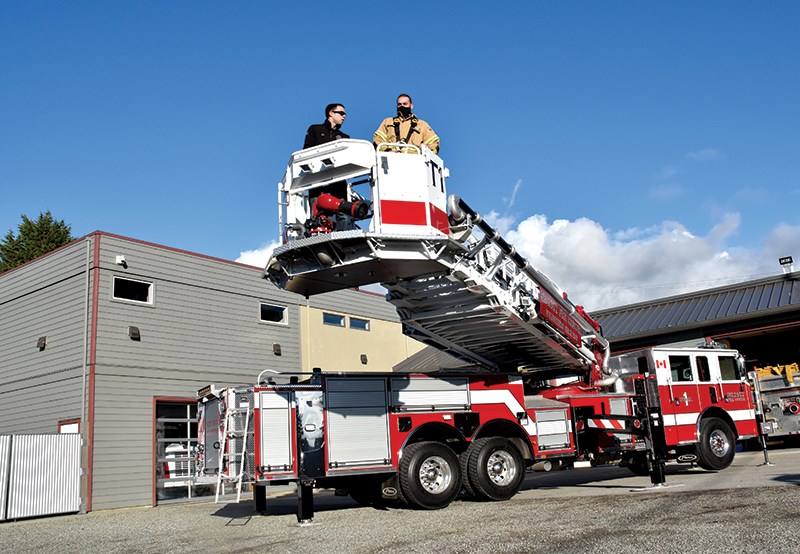 Sechelt is now home to a B.C. first in the world of fire trucks.

A Pierce Ascendant 100-ft. Aerial Tower truck rolled off a ferry on Friday, Feb. 5, and made its final leg of a journey to the Sechelt Fire Department that started at the manufacturer’s Wisconsin location.

While the model is used in several provinces and throughout the United States, the Ascendant “just happens to be the first in B.C.,” fire chief Trevor Pike told Coast Reporter.

The $1.5-million truck, purchased through a combination of capital reserve funds and a provincial loan through the Sechelt Fire Protection District, was chosen by a fire department committee struck for the purpose three years ago to replace the department’s 75-ft. quint ladder truck.

The new tower truck was picked for its flexibility and driveability – and because it’s the shortest unit of its kind in production, allowing it to fit inside the hall without having to lift the roof. “That was probably one of the biggest reasons why we went with it,” said Pike.

Volunteer firefighters and potential rescues will be safer using this tower, too, because people can climb into a bucket, rather than scrambling up ladders. “That is a very huge advantage over what we had before,” said Pike.

It also has a horizontal reach of 28 metres, and the bucket can carry approximately 450 kilograms when water isn’t flowing. “It gives us so many new advantages from an operational perspective,” he said.

Pike said the truck “was built for the future, to serve Sechelt for the next 25 to 30 years,” because of its ability to accommodate buildings as tall as eight storeys.

At 21 years old, the existing quint is approaching end of life and is racking up exorbitant maintenance costs. The truck also lost its Fire Underwriter Survey rating, which increases the cost of insurance.