Two things happened in the B.C. election this week that could tighten up the race in Powell River-Sunshine Coast. One was of mostly local importance and the other could have a provincewide impact.
Oct 15, 2020 10:05 AM By: John Gleeson 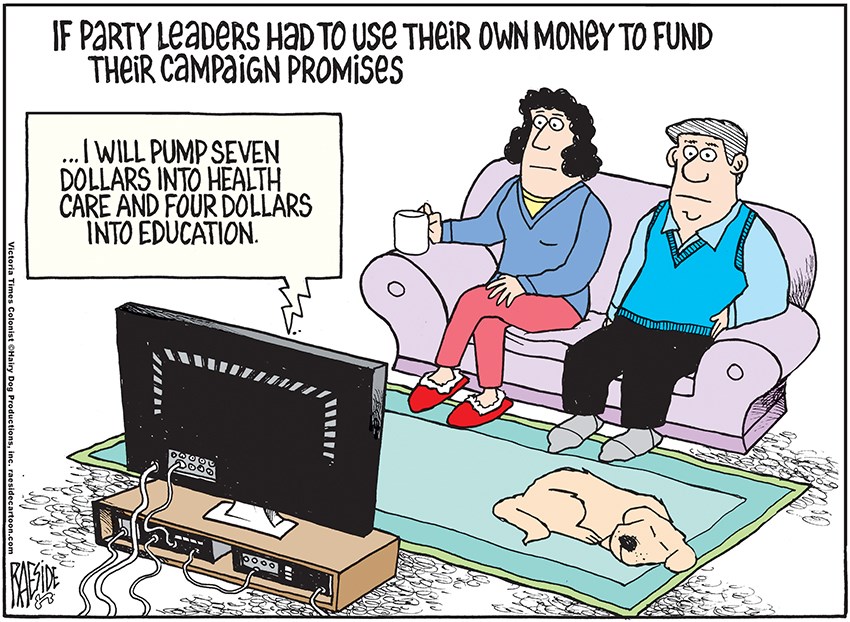 Two things happened in the B.C. election this week that could tighten up the race in Powell River-Sunshine Coast. One was of mostly local importance and the other could have a provincewide impact.

First, Liberal candidate Sandra Stoddart-Hansen announced a surprise promise by her leader, Andrew Wilkinson, to commit $50 million for phase one of a bypass between Gibsons and Sechelt. The promise is conditional, of course, on the Liberals forming the next B.C. government, which opinion polls continue to suggest is a long shot at best. Still, it’s a big promise from a major political party and the first one in this election targeted specifically to this riding.

Not everyone on the Coast wants a bypass. Green candidate Kim Darwin, in her negative reaction to the idea, expressed a view that is shared by many residents. But there is also widespread support: advocates for a new highway collected 6,500 signatures and presented their petition at the B.C. legislature in March 2019. The NDP government’s answer was a corridor study released just last month.

The study described the whole length of Highway 101 from Gibsons to Halfmoon Bay as “collision prone” and identified tens of millions of dollars of needed upgrades. In response, the Horgan government promised to fix only one intersection – at Joe Road. No timetable was given for any further improvements; instead, the NDP said it would start consultations next year on the feasibility of a bypass.

That’s the current plan, and NDP incumbent Nicholas Simons defended it this week. Some voters may now be tempted to send him a message about that, on principle.

Furstenau had a lot to prove. The public spat between former leader Andrew Weaver and the Green caucus of two created some ambivalence about her as Weaver’s successor. On Tuesday, not only did she expel Weaver’s ghost and rebrand the party as hers – she won over many viewers across partly lines with her clear and measured arguments.

Most post-debate analysts said Furstenau’s performance was the strongest of the night. There was no “knockout blow,” but that’s not her style, and perhaps that’s the point. It was an impressive debut for a party leader who had been on the job for only one week before the writ was dropped.

What does it mean for the election? In this riding, both the Greens and the Liberals have a long way to go to catch up to the NDP incumbent, who received more votes in 2017 than all the other candidates combined. The riding is considered a “safe” NDP seat and Simons is running for a fifth term. If nothing else, this week the other two parties made that outcome a little less certain.