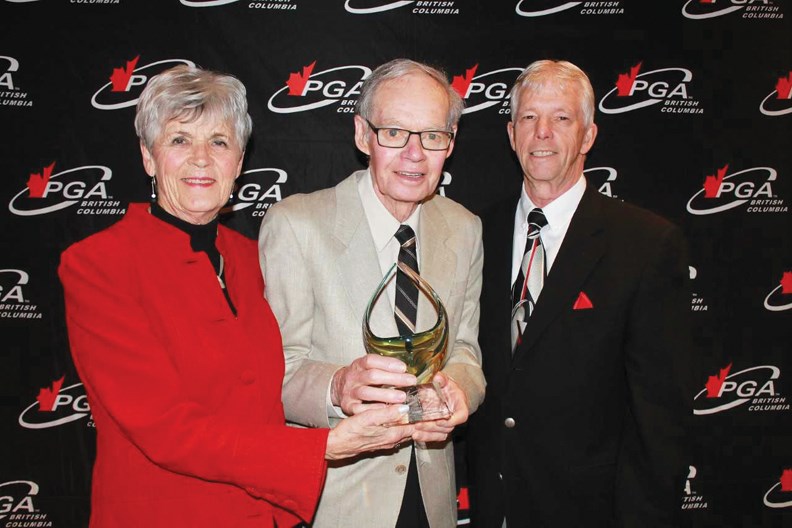 Alvie Thompson (centre) of Wilson Creek passed away last week. He is shown here receiving a trophy from Barrie McWha, to commemorate his induction to the PGA of Canada Hall of Fame. To the left is Alvie’s wife Donna.Photo Submitted from the Professional Golf Association of BC

Retired pro golfer Alvie Thompson passed away Oct. 26 at the age of 81. The Wilson Creek resident was known for his contributions to golf locally and was inducted into the BC Golf Hall of Fame in 2015 and the PGA of Canada Hall of Fame earlier this year.

During his career and after his retirement, Thompson had an impact on a number of young B.C. professional golfers including Jim Pringle, Mike Smedstad, Norm Jackson, Derek Thornley and Pat Dunn. He also impacted the career of Richard Zokol, who was a junior at the Marine Drive club while Thompson was the head professional.

In 1963 he placed 28th in The Masters’ and collected a number of impressive titles over the years including the 1962 PGA of Canada Championship, and the 1963 PGA of Canada Match Play Championship. He was the three-time winner of the Manitoba Open. He was presented the Lifetime Achievement Award from the PGA of B.C. in 2014 and was named to the Golf Hall of Fame in B.C. in 2015. The PGA of B.C.’s Teacher of the Year Award is named in Thompson’s honour.

– Coast Reporter, with files from the Professional Golf Association of British Columbia