Shaun Stephens-Whale completes the linked trail system in under eight hours
May 27, 2021 10:48 AM By: Keili Bartlett 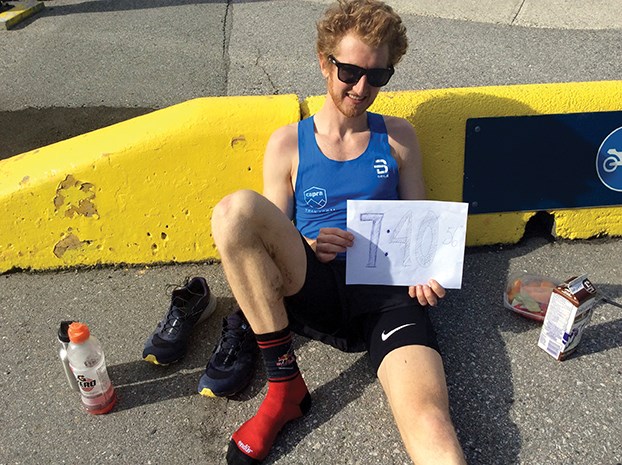 Shaun Stephens-Whale at the end of his Ferry-to-Ferry run on May 19, with the fastest known time of 7:40:54.Photo by Ian Whale

After months of training, Shaun Stephens-Whale was ready for a challenge – and ended up with a new fastest known time (FKT) to his name.

On May 19, Stephens-Whale completed the Sunshine Coast’s Ferry-to-Ferry run with a time of 7:40:54, crossing approximately 87 kilometres and with an elevation gain of more than 2,500 metres.

Like other runners who have completed the trek between the Langdale and Earls Cove ferry terminals, Stephens-Whale opted to head north to have the terrain’s slope in his favour. Since the trail is not strictly defined, it’s also referred to as the “Sunshine Coast Link-Up” and each runner’s route has varied slightly on the trail network between the terminals.

He left the Langdale ferry terminal around 9:30 a.m., estimating to finish between seven and eight hours later. He got into a groove during the first few hours after a “brutal” incline right at the start. In a few hours, he saw Sechelt. His longest training run had been four hours – about half the time he gave himself to complete the course.

“I kind of figured that somewhere between four and five hours was going to be the point in which I went from ‘That feels good’ to ‘Oh my God, how am I gonna finish this?’” he said. “It was around 60k in that things started to fall apart a bit for me.”

He missed his aid station and the fuel he needed at that critical point. That section of his run was on a logging road, so he could see the next five kilometers stretching out in front of him. It became “a mental game” and Stephens-Whale slowed to a walk. At his next aid station, Nick Duff – who until then held the FKT – joined Stephens-Whale to pace him through the last 12 kilometres.

Stephens-Whale had called Duff, a friend, as soon as he decided to take on the Ferry-to-Ferry. Duff immediately offered his support, and was at his side when Stephens-Whale beat his time.

Crossing into Earls Cove, Stephens-Whale heard the honking of his dad’s car horn, a welcome sound from his biggest supporter.

This run was outside of Stephens-Whale’s normal course, as he’s primarily known for his speedy feats of ascending the CN Tower in Toronto, the Eiffel Tower in Paris and winning Boston’s Toughest Mudder. He is currently based in Squamish, where he trains to compete in obstacle course racing.

With races still holding off under pandemic restrictions, the Roberts Creek-raised runner revisited his roots and went back to some of the trails he ran as a child. The trail system has grown and expanded since then, and Stephens-Whale said “having these established FKTs is going to continue encouraging further growth.”

FKTs have been “very much popularized this past year because of the racing restrictions,” Stephens-Whale said. “This spring is actually probably my first full season where I wasn’t injured. I got two months of really good training in 100 plus mile weeks, and I was feeling fit. And I wanted to put that fitness towards something.”

For competitive athletes and those in individual sports such as running, Stephens-Whale said it has been frustrating not having a particular event to train for. That’s where FKTs come in. On the Ferry-to-Ferry, three FKTs have now been set this year. In January, Duff set the FKT of 9:29:00. Katherine Short of Halfmoon Bay holds the female FKT for Ferry-to-Ferry at 9:52:00, which she set in March.

“I think there’s room for improvement, and I think the perfectionist in me always sees that,” Stephens-Whale said of his FKT. He added that the time leaves the door open for someone else to come and beat it.

“But I don’t know if I really want to do that one again. That was a pretty tough day.”