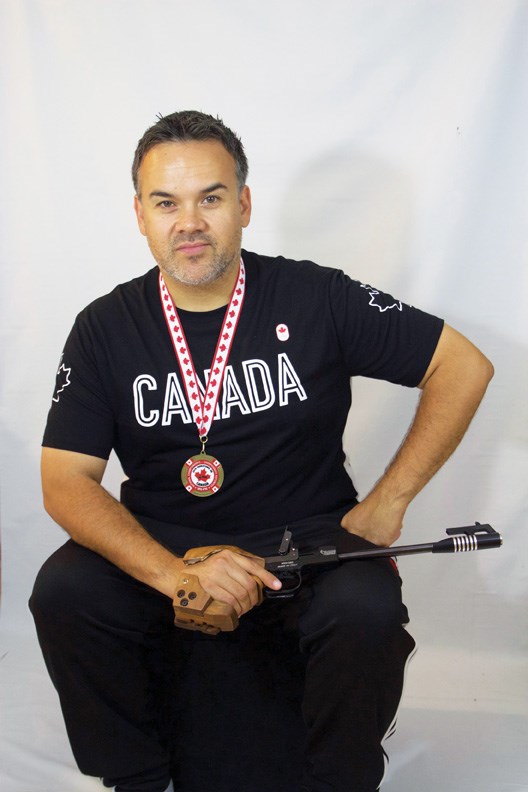 Gibsons shooter Allan Harding took home four gold medals from the 2016 Canadian National Pistol Championships in Toronto and was named the 50m National Champion at the event, which ran from July 27 to Aug. 7.

“I’ve never won the 50m National title before,” Harding said. “That’s always been a tough one. That’s basically the toughest pistol event there is. For so long I was only focused on the 10m event, but this year all I’ve been shooting is 50m internationally.”

The 50m event is widely considered the most challenging competitive pistol event, given the distance and low calibre .22 bullets used.

Harding won gold in two individual events – the 50m and 10m master class – and he helped take home another two gold medals for Team BC -– Harding, Mark Hynes and Thomas Logan – for the 50m and 10m team events.

“In the finals, I felt really confident right before it started and I knew I would shoot really well,” Harding said. “But you can’t let that get to your head because that’s when you could make a mistake.

“The entire finals I was leading – it’s made up of 20 shots – and after the eighth shot, whoever is in last place gets eliminated. Every two shots after that, someone gets eliminated until there’s just one person standing.

“After every single shot in the finals of the 50m, I was leading – I was always ahead,” Harding said. “The guy that came in second [Stan Wills from Alberta] got pretty close a couple of times. I made a couple of small errors and he had some good shots on those ones, so he came close to catching up, but he never passed me. And the last two shots I just crushed.”

Harding plans to continue shooting in the international 50m events next year. He has his sights set on the 2017 World Cups in New Delhi, Munich and Azerbaijan, but his long-range target is still a few years away.

“Tokyo 2020, that’s my goal,” Harding said. “I think about that every day now. Not a day goes by that I don’t think about that. I really want to go and that journey has just started.

Harding is working with personal trainer Patrick Haynes, the VP High Performance at Shooting Federation of Canada, as well as National Pistol Coach Steve Hunt and Lisa Borgerson, who is currently coaching Lynda Kiejko -– one of two Canadian shooters competing in the 2016 Rio Olympics.

“For now I’ve got to map out what the next four years are going to look like,” Harding said. “I’m working with a lot more people now. I’ve got a great relationship with the Performance Vision team in Vancouver. I see them every three or four months or so and we make tiny little adjustments to lenses, specifically for where I’m going to be shooting. That’s never something that I would have done before.”