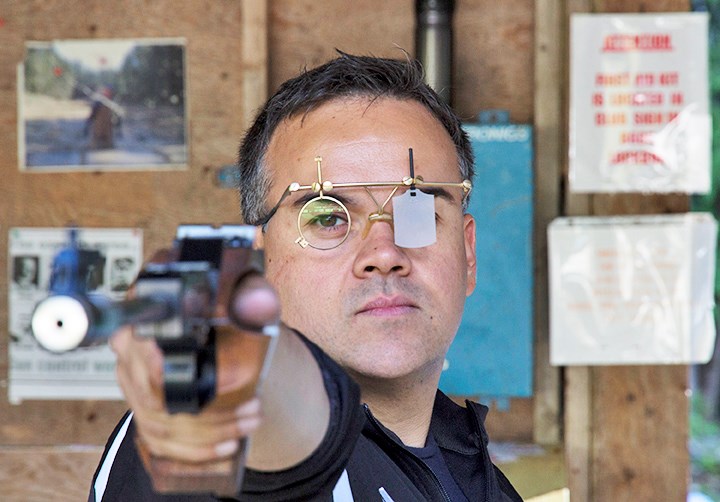 Gibsons marksman Allan Harding finished his international circuit for competitive shooting with a personal best in the 50m pistol division at the International Shooting Sport Federation World Cup in Munich, May 19 to 26.

Harding shot a 540, which he has done at the national level before, but never internationally.

“Five-hundred and forty is kind of the goal that I set out with this year,” Harding said. “That’s what I wanted to be at. It’s the highest score I’ve ever shot at a world cup.”

Harding’s previous personal best at a world cup event was 534, which he shot last year in Munich.

“Yeah,” Harding said. “Munich has been pretty good for me.”

The range in Munich was built for the 1976 Olympics. Harding said the facility feels a little dated, especially after shooting in Bangkok and Rio de Janeiro earlier this year, “but there’s so much history there,” he said. “And you’re just surrounded – there are so many shooters there because it’s central for a lot of Europe.”

Shooters are allowed 60 shots, each one worth up to 10 points, so a perfect score would be 600. South Korea’s Jin Jong-oh set the current world record of 583 in the World Shooting Championships in Granada in 2014.

“I knew Munich was my last [World Cup] so I kind of just went for it,” Harding said. “I did a lot of final adjustments with the coaches on the Canadian team. I went for eye exams, basically pulled out all the stops in terms of what I wanted to do before the competition to make sure I was ready.”

A number of small modifications were made to Harding’s .22 calibre pistol – adjustments to the grip, the trigger, the balance, how it fits his hand and making sure the joints of his knuckles line up evenly.

“And then the actual trigger shoe itself,” Harding said. “Making sure that is in the correct position so it’s coming straight back. Before that – for the Bangkok and Rio World Cups – it was coming back at a bit of an angle. I didn’t notice it but one of the coaches did. I was surprised, they were watching from the stands.”

The trigger was adjusted by about 15 degrees and moved back about four millimetres, “but that just makes it enough of a difference so that when the gun actually fires, my trigger finger is coming straight back – which is key because then you’ll be consistent on every single shot. Or at least more consistent,” Harding said.

Harding is finished with the international circuit for this year, but he’s going to the National Pistol Championship in Toronto at the Pan American Games in the first week of August.

“For that I want to try to qualify for the 10m team again,” he said. “I missed it this year, so I’ll be doing quite a bit of indoor air gun shooting for the 10m, but I’ll still keep going with the 50m because I’ve spent so much of the year training for that event. I’ll just keep going with that until Nationals, then I’ll try to qualify for the 2017 team. And then go from there.”