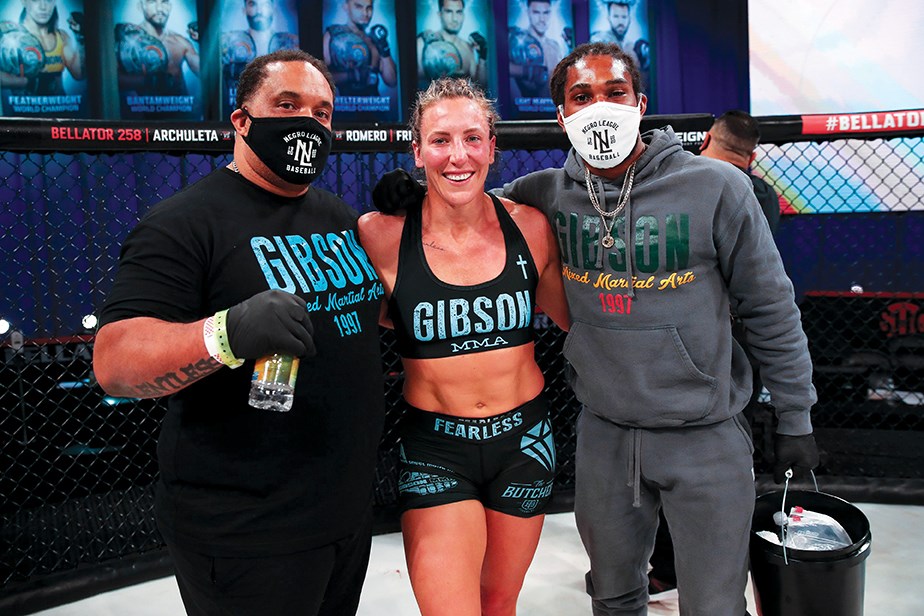 Mixed martial artists Julia Budd and stepson Lance Gibson Jr. fought on the same card for the first time last Friday, coming away with a win apiece at Bellator 257 in Uncassville, Conn., coached by husband and father Lance Gibson Sr.

“Overall the experience of the fight weekend with us both fighting was a huge accomplishment,” Budd (The Jewel) told Coast Reporter from her home in Roberts Creek, where the family has been quarantining.

Budd was gunning for a finish against the experienced champion fighter and was slightly disappointed in the split decision. “Whenever it goes to the judges it’s a little bit nerve-wracking,” she said.

While Budd was the bigger fighter, Silva (9-6-0) showed some early power in her hands. Budd escaped most of the strikes, connecting herself with some low kicks in the first round.

It was more of the same the second round with Silva busier in the third.

Gibsons Jr. was the busier fighter in the first round, lashing Surin with body kicks and strikes.

The 39-year-old Surin (6-3-0) took Gibson into new territory by lasting the first round. Gibson’s first three fights ended in the first round, lasting six minutes 22 seconds in total.

The fight was stopped briefly in the second round when Gibson took an accidental eye-poke, prompting a visit from the ring doctor. Gibson, while initially acknowledging his vision in one eye was somewhat foggy, said he wanted to continue.

When the action resumed, Gibson lashed Surin with body kicks and chopped him down with a kick to the legs. Surin was on the back foot.

Surin ended the round on the ground with Gibson on his back.

Gibson took Surin down midway through the third round, eventually letting him get back up to resume the fight on his feet.

They both went to the ground with a minute remaining and Surin, on Gibson’s back, looking for a submission. But Gibson fought it off.

It was later determined that Gibson broke his fourth toe on his right foot in the fight.

Budd said logistics due to the pandemic was one of the reasons they chose to fight at the same event – but it will probably be the last time.

“The two of us cutting weight and fighting the same night, was kind of crazy,” she said. “It was a lot for our family, but at the same time I’m glad we did it. And now that we tried it, we know we won’t do that again.”

Budd lost her 145-pound title to Brazilian icon Cris Cyborg at Bellator 238 in January 2020, ending her 11-fight win streak. She bounced back last August at Bellator 244, earning a unanimous decision over American Jessy (The Widowmaker) Miele.

In March, Budd received 10 stitches in her foot and wasn’t able to wrestle or run in the lead-up to Bellator 257.

With a 15-3-0 record, Budd remains Bellator’s No. 1 contender at 145 pounds. This was the last fight on her current contract, and she is looking to renegotiate.

“I’m finishing my career and [Gibson Jr.] is beginning his career, so for him to overcome all that adversity early on, it was  a major accomplishment,” she said.

Coast Reporter spoke to Budd a day after a jury found ex-police officer Derek Chauvin guilty on all three charges of murder and manslaughter in the killing of Black Minneapolis resident George Floyd.

In solidarity with protests across the U.S. following Floyd’s murder, Budd organized an anti-racism rally in Sechelt last July, which drew at least 1,000 people.

“That wasn’t justice, it was accountability what happened yesterday,” said Budd of the conviction. “It’s a glimmer of hope that people will be held accountable for their actions.”

Plans had been underway to organize a similar Sunshine Coast rally against racism directed at Indigenous people, but those have been put on hold due to the pandemic. Still, said Budd, “the fight is ongoing.”

– with files from the Canadian Press