On Sunday, July 6, did the Coast feel a tectonic shift, or hear heavy artillery? No, it was just Roberts Creek racer Brian McLennan in his Ford Falcon taking the win over Kenmac’s speed king Shawn Boyd in his mighty Mercury Cougar, in the final Hot R
Jul 9, 2020 10:43 AM By: David Kipling 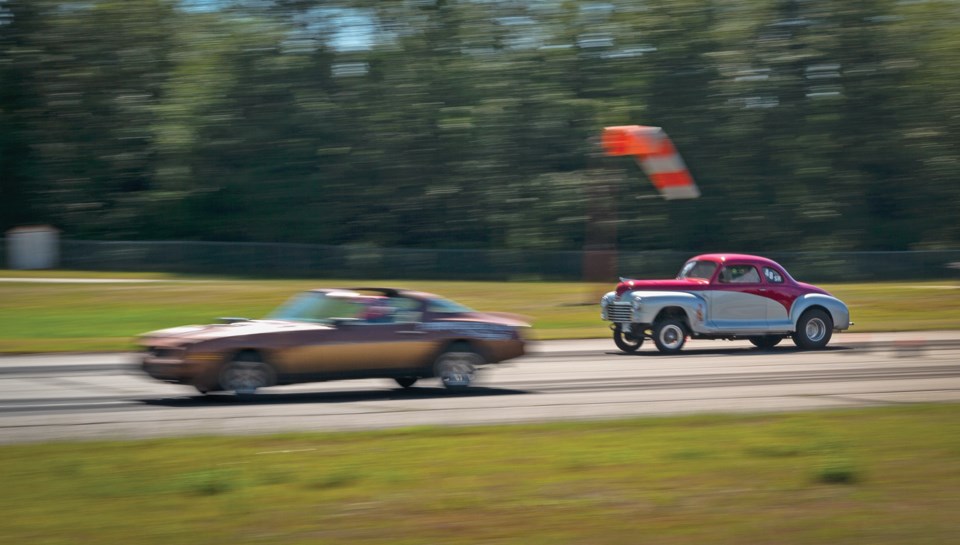 On Sunday, July 6, did the Coast feel a tectonic shift, or hear heavy artillery? No, it was just Roberts Creek racer Brian McLennan in his Ford Falcon taking the win over Kenmac’s speed king Shawn Boyd in his mighty Mercury Cougar, in the final Hot Rod class race of the SCDRA’s “Lockdown Showdown” at the airport.

In the morning longtime volunteer, cowboy-hatted Ron Berg took the microphone and ignited the day by commanding the racers, “Ladies and gentlemen, start your engines,” and the lineup of cars instantly obliged.

Drag racers enjoyed more runs than ever before at this COVID-restricted members-only event, and they entered their cars in any of the four performance classes: Street Machine (collect the groceries); Super Street (urgent groceries); Street Rod (be afraid); and Hot Rod (bring it in a locked trailer, it bites).

Drag racing is the most democratic motor sport on earth; the final race in our Street Machine class was not between “muscle cars” but between a pickup truck and a Jeep. Jack Charbonneau in his Jeep defeated the Halfmoon Bay pickup of Tony Petula, after defeating all their class rivals.

Tom Sealy, from Madeira Park, has been racing his big sedan, and winning, for many years, and this year took the final Super Stock race over his Gibsons rival Brendan Bolder’s sinister jet-black Camaro.

In the faster Street Rod class, most cars arrive on trailers. Did the Dodge car company know back in 1948, that one of that year’s coupes would hit twice its original speed, in the Street Rod division, driven by Mark Tynan from Halfmoon Bay? In the class’s final eliminator, a youthful Tyler Muryn in his nitrous-oxide-boosted Mustang won over Levi Stanley-Clarke’s Camaro. Tyler works at South Coast Ford, and has been a tech inspector of SCDRA cars. Levi, with his sister Rebecca and their father Peter, all raced on Sunday: family values are front and centre in drag racing.

Behind the scenes, volunteers had already devoted unseen hours to cleaning and repairing equipment and mowing airport grass, everyone keeping social distanced and being surprised how easy it was. And, after all the noise and excitement of the day was ended, three club officials conducted a meticulous “fingertip search” of the entire airport runway. Why? It’s fun, but it’s serious.