While news about the novel coronavirus was spreading in January, it took three months for restrictions to hit in B.C., giving Sunshine Coast athletes a sliver of sports-as-normal in 2020.
Dec 31, 2020 2:16 PM By: Sophie Woodrooffe 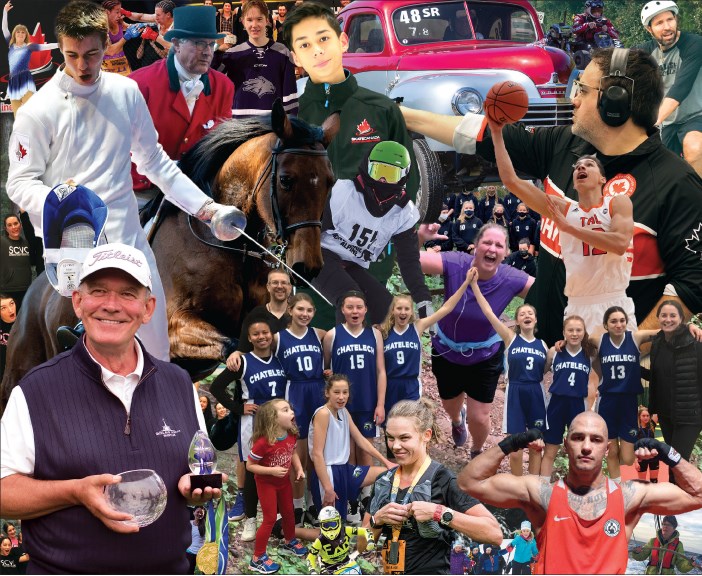 While news about the novel coronavirus was spreading in January, it took three months for restrictions to hit in B.C., giving Sunshine Coast athletes a sliver of sports-as-normal in 2020.

The National team for Chinese Taipei won the Gibsons Curling Club’s largest annual bonspiel in January, Elphinstone grad Elan Kimpton-Cuellar kicked off his basketball season at Thompson Rivers University with a big win over the Mount Royal University Cougars, the Chinook Swim Team took gold several times over at the Lower Mainland Regional Championships in early February, and the Tetrahedron Outdoor Club was able to squeeze in its fifth annual Loppet.

In those later winter months travel was as plentiful as Coast athlete accomplishments.

Sunshine Coast Minor Hockey Association (SCMHA) teams attended tournaments, including in the Kootenays, and finished the season with three teams placing first in their divisions.

Another impressive win came by way of Roberts Creek fencer Fynn Fafard, who led Team Canada as captain to a gold medal at the Junior Pan Am Games in El Salvador. Hopes were high for big results at the World Championships in Salt Lake City, Utah, in April.

Gibsons air pistol shooter Allan Harding, meanwhile, helped Team Canada reach ninth place at InterShoot 2020 in the Netherlands at the start of February and then rebounded from what he described as a disappointing result with a an overall match winner title in the pistol class at the BC Target Sports Association’s Airgun Championships in Richmond.

In early March the 43rd April Fool’s Run was set to sell out, with up to 700 participants lacing up for the gruelling half marathon.

But that all changed mid-month when positive cases continued to rise, forcing health restrictions that shut down the province.

The April Fool’s Run and many other sports events were first postponed, then cancelled, and seasons upended.

The Sunshine Coast Volleyball Club was forced to shutter during the peak of its season, including key tournaments like the Emerald City Classic in Seattle and the highly anticipated Club National Tournament in May in Edmonton.

In April the Sunshine Coast Baseball Association also was forced to take a break before the season could even start.

But as quickly as sports went offline, running, fitness and other clubs shifted to a new, extended online reality.

Out of the gates fitness clubs began teaching virtual classes, including Colleen Preston’s Oasis Training, which offered free classes for seniors in March. Summing up the change, she said: “It’s been pretty wild.”

Motorsports was one of the few that managed to drive ahead, with the Sunshine Coast Drag Racing Association managing to pull off its scheduled events, all without spectators – and in some cases with more runs than ever.

For some athletes, the downtime gave time for other pursuits.

Roberts Creek champion mixed martial artist Julia Budd organized a rally for racial justice with her family, following the death of George Floyd, and also in solidarity with the Indigenous community. At least 1,000 people turned it into the biggest outdoor event on the Coast in 2020. By August, Budd was back in top form with a victory over Jessy Miele at Bellator 244.

Athletes and organizers adapted in different ways, even making way for new sports groups and initiatives.

In April the Coast Cricketers had their inaugural match at Shirley Macey Field, with regular games until August.

In June staff and everyday athletes from School District No. 46 launched a “Soames 2 Everest Challenge,” raising at least $13,000 when all was said and done – far surpassing their goal of $4,000.

By July, Sunshine Coast baseball was back with a truncated season and in August players had a chance of a lifetime to play at the Nat Baily Stadium in Vancouver, thanks to Ryan Dempster who paid for the players’ “big league day.”

Outdoor and at a distance is exactly what sailing is all about, and more relaxed COVID-19 restrictions in the summer meant July’s 31st annual Malaspina Regatta was a go. Brad Lowell on his Raven Lunactic beat out the 25 other vessels in the 12-nautical-mile course.

In September, Tuwanek’s Nick Duff ran the Sunshine Coast Trail in a fastest known time of 27 hours and 20 minutes – all 178 kilometres of the backcountry trail. “No races on the calendar for 2020 has allowed more time for personal objectives so it worked out well,” he told Coast Reporter after the feat.

The Sunshine Coast Golf and Country Club was even able to host the 2020 BC Senior Amateur Championship in September.

As fall came, however, so did a second wave, forcing tighter restrictions and renewed cancellation of indoor group sports, causing confusion when initially announced.

Hockey and ice-skating practice was still permitted and Coast youth soccer teams were cleared to travel to the Lower Mainland to play, but the local COVID Physician Task Force continued recommending non-essential travel be avoided.

But by early December, more cases meant even tighter rules, with all indoor and outdoor team sport games put on pause by the province.

Despite the return to quiet on the courts, rinks and swim lanes, the year did finish on a bright note. A $5,000 Olympic Legacy Grant has given the Chinook Swim Club the opportunity to participate in meets virtually now that they can afford timing equipment.

And Dakota Ridge opened as planned by Dec. 16 for skiers and snowshoers to enjoy the outdoors at a distance.