Work began Monday on the supply and monitoring wells that will allow the Town of Gibsons to service its entire water system from the aquifer – and Town officials are still hoping to convince the Sunshine Coast Regional District (SCRD) to reject any p
Jan 15, 2019 7:19 PM By: Sean Eckford 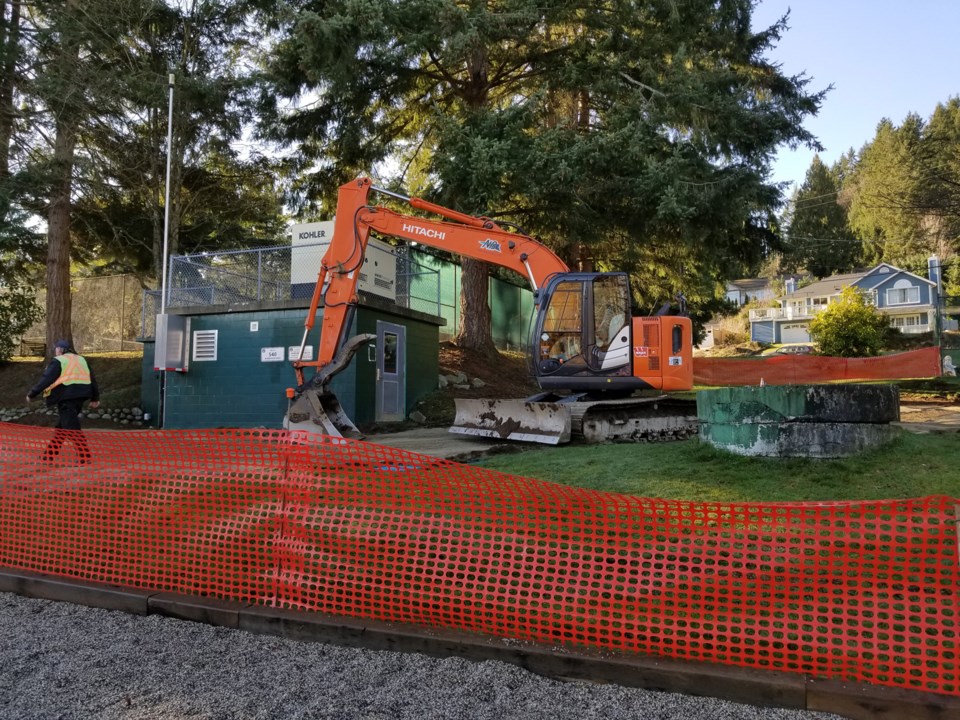 An excavator began site preparation Monday for a new well at Dougall Park to supply the Gibsons water system.Town of Gibsons Photo

Work began Monday on the supply and monitoring wells that will allow the Town of Gibsons to service its entire water system from the aquifer – and Town officials are still hoping to convince the Sunshine Coast Regional District (SCRD) to reject any plan to tap the same source.

The service area known as Zone 3, which includes most of Upper Gibsons, is currently supplied through a bulk water agreement with the SCRD.

Although some elements still need budget approval and funding, Gibsons is planning to spend about $2 million on new infrastructure, which will allow the Town to meet most of the demand in Zone 3 without SCRD water.

In a briefing for councillors at the Jan. 8 committee of the whole meeting, director of infrastructure services Dave Newman said some SCRD water will still be needed for “emergency and fire flow” and, depending on the rate of population growth, peak hour demand in the future.

“All the information that we have at present, and our annual monitoring is proving this out, is that the aquifer is healthy and it’s able to supply the required volume for the build-out of the town,” Newman said. “The projections are already very conservative and they take into account climate change, sea level rise, and so on.”

Councillors were generally supportive of the water strategy, which was first put forward by the previous council, but they did have questions around the need to chlorinate Zone 3’s water after switching to the aquifer.

Gibsons is one of the few communities in B.C. that does not have to chlorinate its water supply.

Newman said that will remain the case for Zones 1 and 2, but because Zone 3 could still require some water from the SCRD, it puts the Town in the position of mixing water that requires chlorination into the supply.

“Zone 3, although it would be aquifer water, would still be chlorinated,” he said. “It’s unlikely that the [Vancouver Coastal Health] drinking water officer would support an unchlorinated supply for Zone 3. They’re considering this a new expansion of a water system.”

Preparation started on the site of a new supply well at Dougall Park on Jan. 14 and new monitoring wells will be drilled in three locations around Lower Gibsons.

At the same time, the Town is hoping to bring the SCRD and Sechelt into a region-wide governance structure for water and, according to Newman’s report, start a “new discussion at the [SCRD] board requesting the omission of the Mahan site.”

Mahan Road was one of the test locations the SCRD has looked at as part of its search for new groundwater sources.

Chief administrative officer Emanuel Machado told the committee that they hope to create “a collaborative model where we co-manage the Coast’s water assets… In a practical sense the Town would continue to manage the Gibsons aquifer and the SCRD would continue to focus on the Chapman [system].”

The latest report on the search for groundwater sources is expected to go to the SCRD’s infrastructure services committee on Jan. 24.