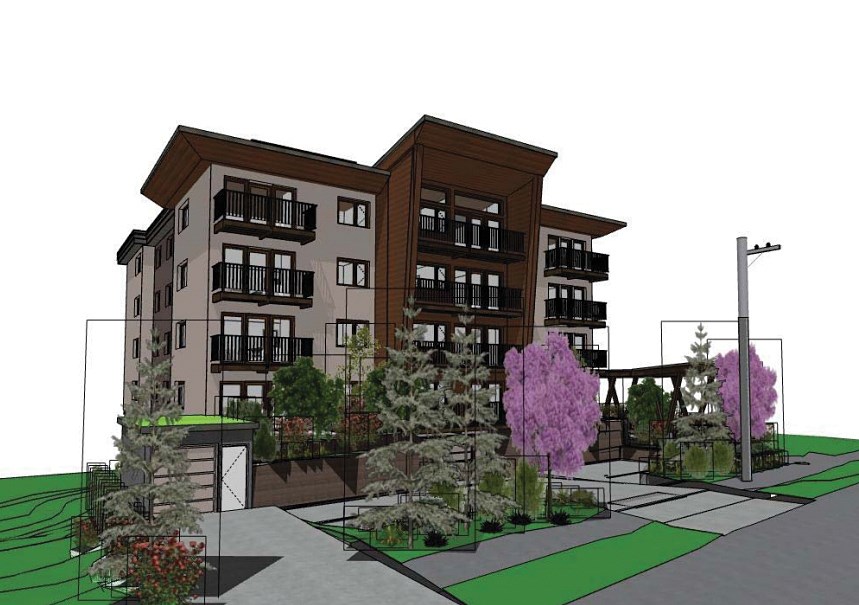 A rendering of the front of the proposed rental building at 5681 Ebbtide St. in Sechelt.Image via District of Sechelt
Councillors acknowledged Sechelt’s dire need for purpose-built rental units in their discussion around and support of an application that if approved would bring more than two dozen apartments to the downtown area.

The 1,655-sq.-metre undeveloped lot at 5681 Ebbtide St., between Hightide and Wharf avenues, is zoned Residential 4 (R-4) and is designated as multi-family/mixed residential under the OCP.

An OCP amendment is needed to support increased density and zoning amendments would regulate height, the number of units, floor area ratio and parking.

Four storeys would be composed of residential units, comprising studios and one-bedroom and two-bedroom apartments, with parking below for a total of five storeys and a height of 18.5 metres “from the average natural grade to the peak of the roof,” according to a June 2 staff report.

The current maximum heigh in the R-4 zone is 10.5 metres.

As for density, R-4 allows for up to 83 units per hectare, while the application would see that increase to 170, due to the number of studio apartments, according to planning staff.

Twenty-eight parking spaces would be located in a partial basement and at the rear of the building, with 10 secure bicycle storage spaces in the basement, also.

Staff recommended giving first reading to the OCP and bylaw changes because the rental building “is appropriate for the noted land use designation and meets several goals and policies of the OCP,” such as increasing the residential density of Sechelt Village.

As for amenities, the staff report noted the applicant is “seeking a significant increase beyond the densities considered in the OCP,” and said council could consider the construction of rental housing “as the amenity itself,” referencing last year’s Sunshine Coast Housing Needs Assessment Report that called out Sechelt as particularly lacking in rental housing options.

“The provision of rental housing, whether market, or nonmarket, can be considered an appropriate benefit to the community in exchange for additional density,” the staff report said, suggesting council could secure the tenure of the units as rental through a housing agreement.

Further, the staff report noted “key recommendations from the Housing Needs Implementation Report can be achieved through [a] development proposal such as this,” including using housing agreements to support rental developments.

Council voted in support of that option.

The development would command $10,009 per unit in development cost charges for a total of $280,252 for the District of Sechelt.

During discussion, Coun. Matt McLean said smaller units are welcome since they are typically more affordable, and noted the OCP puts limits at 100 units per hectare, though there are some exceptions in Sechelt, such as the Hightide Supportive Housing complex.

“If we look at the OCP, I think we can think towards that change on a more permanent basis and bring the unit size down a little bit, because this is how you bring people downtown,” he said.

He wasn’t as supportive of the proposed height of the building, however, saying the 18.5-metre height doesn’t match other buildings in the neighbourhood.

“It should really be three storeys facing the street,” he said, and recommended the height be reduced by three metres, adding he was trying to anticipate community concerns.

Planning director Andrew Allen noted reducing the height could have a “significant impact” on the number of units, which is “probably the baseline to start with.”

Coun. Alton Toth also supported the application, and “strongly” encouraged the applicant “to try and look at setting the building a little bit lower into the site if they can.”

“But we need rental,” he said, “and I am willing to move this forward.”

With first reading approved, the application will be distributed to various community groups and stakeholders for comment and a public information meeting is expected to be hosted by the applicant.