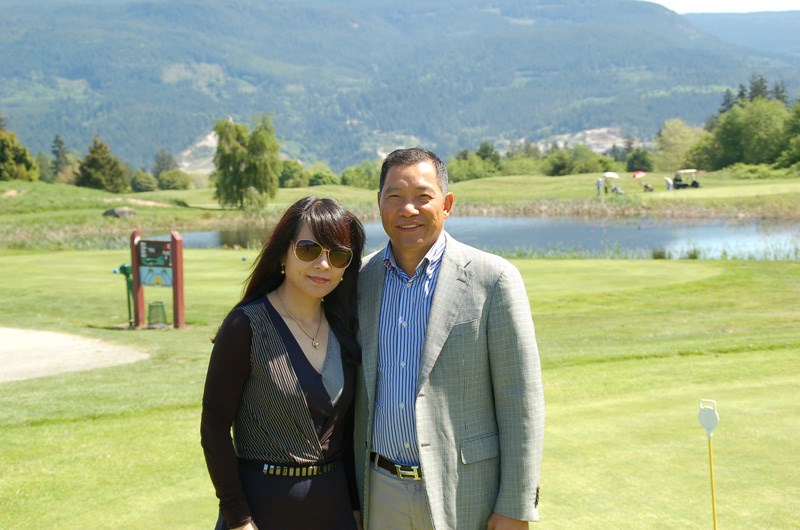 Owen Wang with his wife Vivian Zhang at the Sechelt Golf and Country Club. Wang recently purchased the course and has some exciting things planned to improve the greens and surrounding area.Christine Wood

He penned the deal on March 19 and agreed to talk to Coast Reporter about the purchase this week.

Although Wang wouldn’t say what he paid for the 18-hole course, he did divulge his plans to invest upwards of $20 million into the greens and a new hotel/spa on site.

He plans to put at least $2 million into improvements to the golf course and clubhouse.

Those improvements will be designed by world-renowned golf course designer Wayne Carlton.

Wang also plans to build a 150-unit hotel/spa beside the course that will be part of the high-end Lamborghini hotel and resort chain.

He wants to break ground on the hotel/spa late this fall.

The site is already zoned for a hotel, but the plans will have to go to Sechelt council for approval of a development permit before building can get underway.

“We’re delighted that Mr. Wang and his family have taken ownership of the operation and it’s exciting to see the plans that they have,” Henderson said. “We look forward to working with them to bring those to fruition.”

He noted the cooperation between Wang and the District so far has been “extraordinary.”

“We were all committed, both Mr. Wang and the District, to processing the purchase and all the parts of the purchase on an expedited basis and it’s something that we’re very proud of,” Henderson said. “It shows the other developers and investors what they can expect from Sechelt if they bring a new and exciting project to us.”

Wang has some very big plans for his first golf course.

Although the investor is no stranger to owning real estate, the Sechelt Golf and Country Club is his first venture into the world of golf course ownership.

“This is my first time but I love to play golf,” Wang told Coast Reporter through an interpreter. “I’ve played on over 500 courses around the world.”

He heard about the possibility to purchase the Sechelt course through a friend who lives in the area and who hails from his hometown. Once he visited, he knew he had to put in an offer.

Wang said he wanted to purchase the course for three reasons: his love of golf, the quality of life and natural beauty in Sechelt and the possibility of retirement in the area.

“Sechelt is a great place to live,” he said.

For now, Wang is living with his wife Vivian Zhang in Vancouver and commuting to the course during the week, but said he’s considering retirement on the Coast in the future.

He’ll be launching a new logo and website for the golf course in the coming weeks and he’s already doing some minor fixes at the course that won’t affect play.

Wang plans to start working on the greens this winter so the construction doesn’t interrupt spring, summer and fall play. The work on the course and the hotel is expected to take about three years to complete.

The golf course is open now for daily play and public drop-ins are welcome, Wang said. The restaurant is also open and available for rentals for special functions.

Wang said the public can keep up to date with what’s happening at the golf course through the club’s website at www.secheltgolfclub.com.