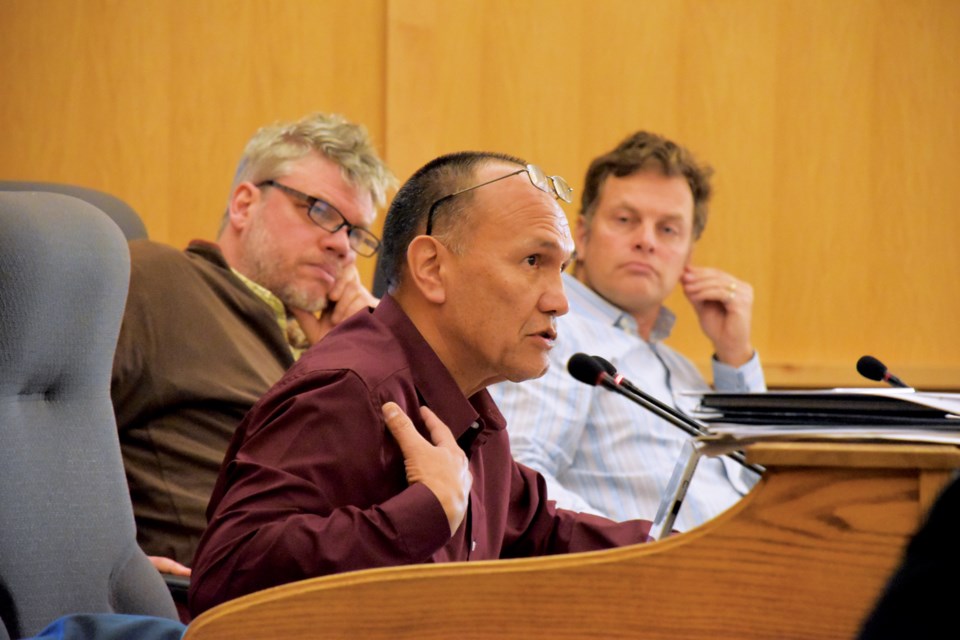 Forget the Chapman Lake expansion project and move ahead with the reservoir. This was the advice from Sunshine Coast Regional District (SCRD) chair and Sechelt mayor Bruce Milne at a charged board meeting on Feb. 8.

“What we’re suggesting is that we move the plan on the engineered lake one year forward, maybe two, and eliminate the need for a drawdown and $5-million expenditure,” said Milne to a room packed with members of the public and of the Sunshine Coast Conservation Association.

To get there, Milne walked the board through the chronology of events that he said illuminate why the District of Sechelt sent a controversial letter to the SCRD in December requesting “all reasonable and expeditious measures be taken to secure an expanded water supply on behalf of the District of Sechelt taxpayers and citizens.”

A significant moment in that chronology was the 2015 resolution approving the Chapman Lake water supply expansion option that involves modifying or replacing the existing dam and deepening the channel connecting Chapman Lake to Chapman Creek to install a large-diameter gravity-fed pipe.

That resolution stipulated the system be used only during periods of drought and until long-term source development projects are underway, such as the construction of an “engineered lake” or reservoir, and groundwater investigation. According to the Comprehensive Regional Water Plan, obtaining property rights to construct a reservoir is set for 2021. The first round of the 2018 budget includes a $200,000 investment in the preliminary engineering, costing and site identification of the reservoir.

“If it’s 2018 and we’re not started and we have an engineered lake that will be built in 2021, why would we spend $5 million for three years? That was the question that the councillors asked,” Milne said.

Chapman Lake is located on traditional shíshálh Nation territory, and Milne also referenced a requirement by the Nation that the SCRD provide written assurance that the drawdown would only be used after Stage 4 restrictions are in effect – as the emergency syphon system was used last fall – and not to facilitate increased development.

“I, for one, and Sechelt council are not going to be party to an agreement with shíshálh that says we’re going to do something, and that we respect your decision and then actually a couple of years later say, ‘Well, sorry, we got to Stage 3 and we had to draw it down,’” Milne said.

Sechelt Indian Government District director Keith Julius thanked Milne for his honesty about using the drawdown for emergencies only. Referencing the long-term strategic vision laid out in the regional water plan, which includes a set of targets for 2060, Julius said: “We need more than what we’ve been discussing with the reservoir, the siphon, the channel, these wells, we actually need far more… with some of these things that we are asking, our wishes and our wants, we would actually be holding ourselves back as well when it comes to certain developments that we have planned.”

The Chapman Lake expansion project is pending approval by the B.C. Ministry of Environment because it is situated in a provincial park. Select SCRD staff and directors will be meeting with Environment Minister George Heyman in March to discuss next steps.

The Chapman drawdown remains a divisive issue at the SCRD, with Elphinstone director Lorne Lewis staunchly opposed to the project. “Why can’t you blow up Chapman Lake? Because it’s in a provincial park. Why is it in a provincial park? So you can’t blow it up,” said Lewis at the meeting.

Howe Sound director Ian Winn noted the risk involved in relying on Chapman as a single water source. But he also suggested without concrete alternative plans, both the engineered lake and the drawdown should be pursued. “We have a plan, we’re working to it, we need to review it and adjust it and see what else we need to be doing to it, but I don’t think it’s time to throw the baby out with the lake water yet,” he said.

Roberts Creek director Mark Lebbell said the upcoming meeting with the environment minister has the “potential, if we’re not clear, to shut the door for a long time.” He requested more technical information from staff concerning the reservoir alternative and called timelines “speculation.”

Halfmoon Bay director Garry Nohr also said a technical report is needed to determine timelines for the reservoir, adding it would likely take at least three years from start to finish. He said without clear timelines, “We’re going to go through Stage 4 for the next three or four years because some people seem to not want the drawdown system. And so if you sit in this seat for the next three, four, five years without a proper decision coming out in the next few weeks, basically you can expect the population to be very upset with you.”

MLA Nicholas Simons, who has helped arrange meetings between the SCRD and provincial ministers, told Coast Reporter he is in favour of an alternative “longer term solution” to the Chapman project. “I don’t know what appetite there is to change a Class A park. I think it’s probably not very strong, especially when you consider the fact that this would be an emergency measure only. Money was provided for trying to establish or identify other sources. I think that’s still our most important job.”

Meanwhile, a special committee meeting has been scheduled for March 1 to talk about the regional water plan, and the board agreed to respond to the District of Sechelt, as proposed by Gibsons director Jeremy Valeriote. The letter will highlight the four core water projects currently in process that are intended to secure an expanded water supply and increase storage, expeditiously.