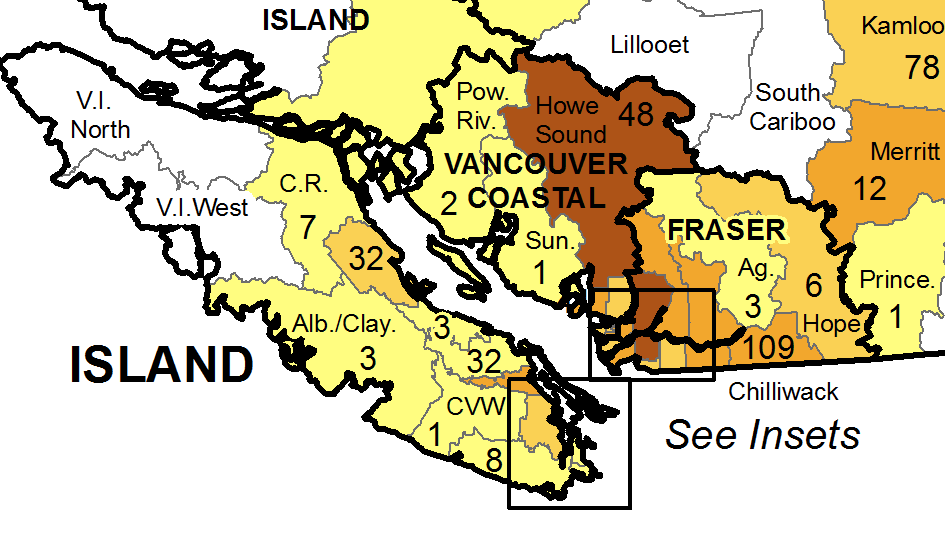 A map by the BCCDC shows case counts reported from Feb. 14 to 20.BCCDC Image

COVID-19 case counts on the Sunshine Coast and surrounding areas remain low, according to the latest figures released by BC Centre for Disease Control (BCCDC).

Only one new case between Feb. 14 and 20 was reported in the Sunshine Coast local health area, compared with two the week before.

From Jan. 31 to Feb. 20, a total of four cases were reported on the Sunshine Coast.

The neighbouring area of Howe Sound, which has seen far more transmission of the virus this year, also saw a decline from Feb. 14 to 20, with 48 cases reported. Powell River had two cases.

As of Feb. 25, 702 cases in that community had been reported since the start of the year, with all but about 30 recovered.

“The reported cases continue to be among young adults who reside in Whistler, with COVID-19 transmission occurring predominantly in household settings,” said VCH.

That day, 589 new cases of COVID-19 were reported in the province, though the number is provisional due to reporting delays, according to a joint statement from Dr. Bonnie Henry, B.C.’s provincial health officer, and Minister of Health Adrian Dix issued Friday.

As the province gears up to begin vaccinating the wider public, the officials also recognized that the federal government has approved two versions of a COVID-19 vaccine – one by Oxford-AstraZeneca and another by the Verity-Serum Institute of India.

“This is very encouraging news for everyone in British Columbia,” said the statement.

“Unlike the vaccines that have been available to date, this new, two-dose viral vector [Oxford-AstraZeneca] vaccine has the benefit of being ‘fridge stable,’ making it much easier to transport and distribute around the province.”

The new vaccine will be integrated into B.C.’s immunization program and with more supply the province will be looking at speeding up immunization of “priority populations and essential workers,” said the Feb. 26 statement.

The province will soon wind up the first two phases of its vaccination plan ahead of mass immunizations for the general population set to begin in April.

The initial phases are focused on the most vulnerable populations, health-care workers most at risk, elderly British Columbians above the age of 80 and Indigenous seniors over the age of 65.

Pfizer deliveries have ramped up this week, with 475,020 doses arriving in Canada.

Moderna is set to boost deliveries beginning the week of March 8, with 466,000 doses.

– with files from Tyler Orton, BIV