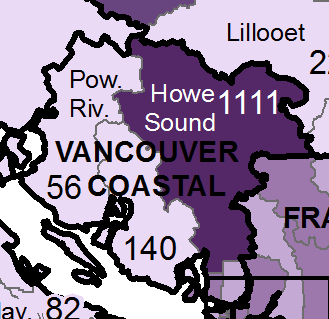 There have been 140 COVID-19 cases reported by the BC Centre for Disease Control on the Lower Sunshine Coast from January 2020 to January 2021.BCCDC Image

For the third week, COVID-19 cases have been down on the Sunshine Coast.

Between Feb. 7 and 13 there were two positive cases reported, according to data from the BC Centre for Disease Control, while the cumulative number of cases on the Sunshine Coast from January 2020 to January 2021 is 140.

There were no cases reported in Powell River last week and at 72, cases also dropped in the Howe Sound region, which has been battling outsized increases compared to nearby regions.

At a media briefing on Feb. 17, a statement from the Ministry of Health announced three people died in a 24-hour period, marking the lowest daily number of deaths due to COVID-19 in B.C. since Nov. 19.

Immunizations continue to be scarce, with 4,260 arms being jabbed in the past 24 hours. Of those, 3,116 people were receiving their required second dose. In total, 176,015 doses have been administered to 149,985 people since the first shot was dispensed on Dec. 16. Of those, 26,030 individuals have had two doses.

The ministry also announced the launch of a survey to understand the impacts of the pandemic on youth, which is being conducted by researchers at the University of British Columbia, Simon Fraser University, B.C. Children’s Hospital and the BCCDC.

The survey can be completed here: www.bcchr.ca/POP/our-research/pics

– with files from Glen Korstrom / BIV