Gibsons Wildlife Rehabilitation Centre co-founder Irene Davy was recognized by the Conservation Officer Service (COS) with an award last week for her “invaluable support” to the organization.
Feb 18, 2021 12:40 PM By: Sophie Woodrooffe 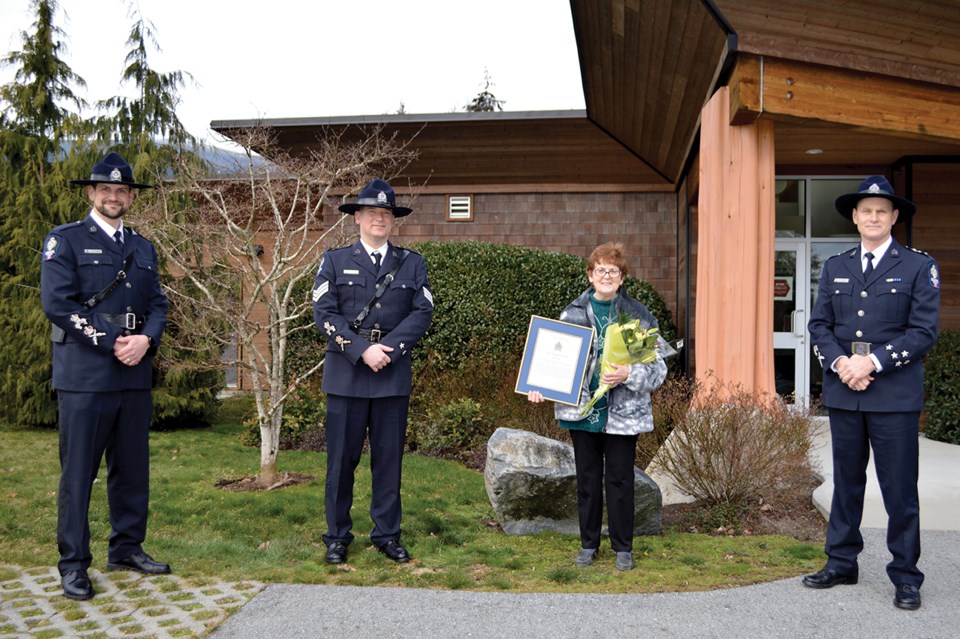 Gibsons Wildlife Rehabilitation Centre co-founder Irene Davy was recognized by the Conservation Officer Service (COS) with an award last week for her “invaluable support” to the organization.

“Irene has extensive knowledge of the treatment and care of wildlife and offers the COS a continual reliable option,” reads a description on the Special Recognition Award – an honour awarded only a couple of times a year, said COS Sgt. Dean Miller, who nominated Davy.

It recognizes people or organizations that have made a significant contribution to the COS or performed a service on their behalf.

Davy said she was surprised to learn about the award. “It means a lot that the COS looks to Gibsons Wildlife Rehab Centre for help with injured wildlife, and they appreciate working with us,” she told Coast Reporter in an email.

She has been the sole operator of the rehabilitation centre located outside of Gibsons since her husband, Clint Davy, died last January. They founded the organization about 30 years ago.

The award description describes both Irene and the late Clint Davy as invaluable supports “in many instances in dealing with distressed and injured wildlife, often guiding conservation officer response to the best outcome for wildlife and the local community.”

Irene Davy was also praised for connecting the organization to local veterinarians and volunteer groups. “We wanted to recognize Irene specifically for her continued involvement representing the welfare of wildlife since Clint passed last year,” Miller told Coast Reporter in an email.

According to Davy, the centre has been quieter than usual due to the pandemic.

The centre is not accepting volunteers because of COVID-19 precautions, but will likely seek them out when demands increase.