Gibsons Mayor Bill Beamish says the Town intends to tackle concerns about commercial barges moored in area covered by the Town’s recreational water lease. Beamish made the comments at the Oct.
Oct 15, 2020 9:56 AM By: Sean Eckford 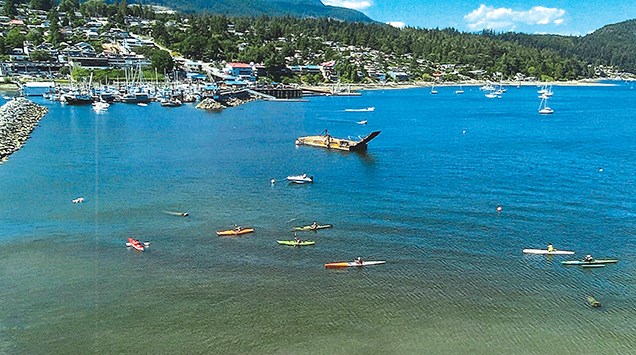 A photo included with a petition asking for Gibsons to review its policy on commercial barges in the recreational water lease area and have them removed.Town of Gibsons

Beamish made the comments at the Oct. 6 council meeting, after a resident presented a petition asking the Town to “review the presence of commercial barges anchored in the recreational water adjacent to the sea breakwater structure … following concerns for the environment and safety.”

Carol McDermott told council that along with concerns that have already been highlighted as part of the discussion around the healthy harbour initiative about damage to eelgrass beds and other environmental impacts, the residents who signed the petition are worried about “safety and the liability of water activities of residents and visitors.”

“My major concern is it’s only a matter of time before there’s a fatal accident,” she said.

McDemott also quoted from the Town’s recreational water lease bylaw, which says, “No person may anchor, moor, tow, push, or allow to stand a barge which is used for commercial purpose or a log-boom within the recreational water lease,” although there is an exception made for barges used for the purpose of transiting the lease area on a direct route to or from a berth, beach, or landing ramp.

Beamish acknowledged that some barges have caused problems in the past, and cited the need to have one that had been “orphaned” removed because of the potential for pollution.

“I recall dealing with this back in the early part of this century, when I was the CAO here,” Beamish said. “It’s been going on for some time. It is part of our intention for our healthy harbor initiative to come up with a solution to this.”

Beamish called the photos McDemott included with the petition an “eye opener” and said they would be “good documentation of some of the issues that that these barges can cause in our area.”