The Sunshine Coast Regional District (SCRD) plans to prohibit the disposal of food waste, paper, and cardboard in garbage by Jan. 1, 2022, as part of a strategy to make the best use of the aging Sechelt Landfill.
Jan 21, 2021 10:42 AM By: Rik Jespersen 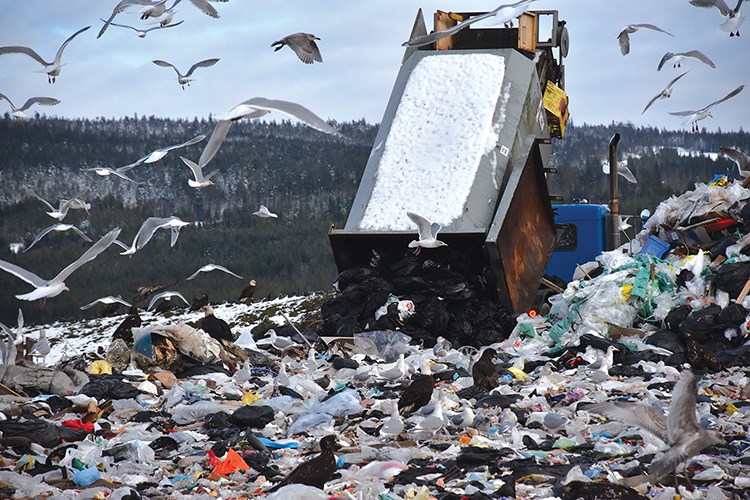 The Sunshine Coast Regional District is targeting the disposal of paper, cardboard and food waste in order to extend the life of the Sechelt Landfill.Sophie Woodrooffe File Photo

The Sunshine Coast Regional District (SCRD) plans to prohibit the disposal of food waste, paper, and cardboard in garbage by Jan. 1, 2022, as part of a strategy to make the best use of the aging Sechelt Landfill.

“Currently, the lower Sunshine Coast has one disposal option for its garbage, the Sechelt Landfill,” said an SCRD staff report proposing the bans, presented to the Jan. 14 meeting of the SCRD infrastructure committee. “As of Nov. 29, 2019, the Landfill had approximately six years of capacity remaining, until early 2026.”

The report noted that the SCRD conducted studies in 2014 and 2015, which showed that 34 per cent of garbage buried in the Landfill consisted of food waste, 23 per cent was recyclables, and another nine per cent was food-soiled paper or box-paper (cardboard). Those materials can now be disposed at either recycling depots or through organics pickups in the SCRD and Gibsons.

The current exceptions for organics pickups are the District of Sechelt and the Sechelt Indian Government District. Sechelt expects to have curbside organics pickups in place in the first half of this year, Sechelt Director Darnelda Siegers told the meeting.

Siegers also raised the possibility of requiring the use of clear plastic garbage bags so that the contents of disposed materials could be more easily determined. “If we actually look at putting a ban in, how do we monitor that, because most people use black garbage bags,” Siegers asked. “Nobody knows what's in there.”

Another issue raised was how businesses that generate a large volume of food waste, like restaurants and grocery stores, might be able to comply with the bans.

Robyn Cooper, SCRD Manager of Solid Waste Services, said that this kind of ban must be built in at the point of disposal. “How everybody would comply varies based on the individual or the individual business,” Cooper said. “We're not prescriptive in that regard, as a regulator. But there will be lots of options that folks can utilize that matches their business or their practice.”

The ban allows for a five-per-cent threshold, meaning that if staff determines that five percent or less of a load of garbage is composed of banned material, it would still be allowed in the landfill, as the banned materials could have been included inadvertently.

The SCRD strategy includes an “education phase,” running from Jan. 1, 2022 to June 30, 2022, during which individuals or garbage haulers would be advised if their load exceeded the threshold and be provided an education package. The education package would contain information about the ban, the thresholds, and options for diversion.

“That would be followed by an enforcement phase, [during which] the customer would be advised their load exceeded the threshold and that fines would be applied to the load,” the report said. Enforcement with fines would begin July 1, 2022.

Directors approved the proposals for the ban, with an added request to SCRD staff investigate how other jurisdictions monitor compliance, including the use of see-through garbage bags.