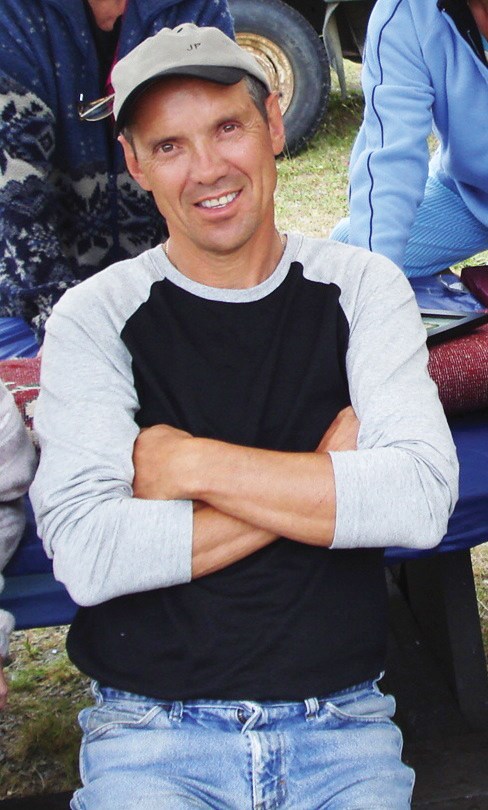 John Phare was killed while battling the Sechelt forest fire. A celebration of life will be held Saturday, July 18, from 1 to 5 p.m. at the Gibsons and Area Community Centre.Photo Submitted

The Sunshine Coast lost a hero last Sunday when 60-year-old John Phare of Roberts Creek was struck by a falling tree and killed while helping battle the forest fire at the Old Sechelt Mine site.

According to a witness, the experienced faller had cut down a danger tree on a portion of the fire site that had been substantially extinguished when a second tree came down on top of him.

“There were a lot of coals and hot spots and he had to fall this one big fir and he felled that, and then this other tree came down behind it. But with all the noise and helicopters, he didn’t hear anything and it hit him,” said Phare’s older brother, Lonnie, who was working at another part of the forest fire when the accident happened.

“The paramedics tried to revive him right there. The Sechelt paramedics came out and plus their own medic that was on scene the whole time, but it was too late.”

Phare was pronounced dead at the scene shortly after 12 noon.

He had two sons and a daughter and was to be married soon to fiancée Kimiko Hawkes, who expressed her grief in an emailed statement to Coast Reporter.

“I miss him so much I feel like I’m shattering inside, and the hole from his absence I will feel forever,” Hawkes said in the statement.

She described Phare as a very good man who shared much of himself with the community.

“He was hard working, honest, had integrity, was generous and kind … always, to everyone,” Hawkes said.

“He never boasted or needed to be noticed for always doing the next right thing. He did it because it was his nature – it was simply who he was. My Johnny was a good, good man.”

Phare was contracted to help battle the forest fire at the Old Sechelt Mine site because he had experience in the field with his company, John Phare Contracting.

“We go to the forest fire things all the time with forestry during fire season if we’re not working, which we weren’t because we were shut down because of the heat,” Lonnie said. “So John was called in with fallers and he brought some machines, too. That’s why I was over there at the same time, because I operate the machines.”

Lonnie said his brother was always one to volunteer to help, and that he was quick to offer his service to the firefighting effort.

“He was the type of person that everyone called a hero because, whoever it was, whether work-wise or just people on the street who needed help, he’d be right there to help them. He was always the person to look up to,” Lonnie said.

“He was my boss and he was my friend and my brother. He helped anybody that he could. He was well liked all over the Coast.”

Phare was born at home between Selma Park and Davis Bay, as there was not enough time to travel to the hospital, then located in Garden Bay, Lonnie said. He attended Roberts Creek Elementary School and Elphinstone Secondary School.

Sechelt (shíshálh) Nation Chief Calvin Craigan also spoke highly of Phare this week, noting many Nation members went to school with him, played sports with him or worked with him in forestry.

“He was a strong, quiet individual, but he was very community oriented. Any events that were happening in the community, that family always volunteered, especially John,” Craigan said.

Upon hearing news of Phare’s passing, Sechelt Mayor Bruce Milne expressed his condolences to the family and noted that “any accidental, unexpected fatality is tragic. When someone dies while protecting the lives of others, the tragedy is mixed with gratitude for their service. When it is a community member who has died in service, the burden of sorrow is compounded.”

The Sunshine Coast community rallied in support of Phare’s family this week, setting up a drop-off location for condolence cards and donations at Embellish Emporium in the Gibsons Park Plaza, an account in John Phare’s name at the Sunshine Coast Credit Union, and an online fund in support of the family at www.gofundme.com/johnpharememorial

Lonnie said the outpouring of support by the Coast community has been “really appreciated,” and that he hopes the community will continue to give to help support Hawkes during this difficult time.

“We just basically want the community to help her out big time because it’s going to be quite a financial thing for her,” Lonnie said.

A public celebration of life has been planned for Phare on Saturday, July 18 from 1 to 5 p.m. at the Gibsons and Area Community Centre arena, and the community is welcome to attend.