Exhausted geese falling from the sky 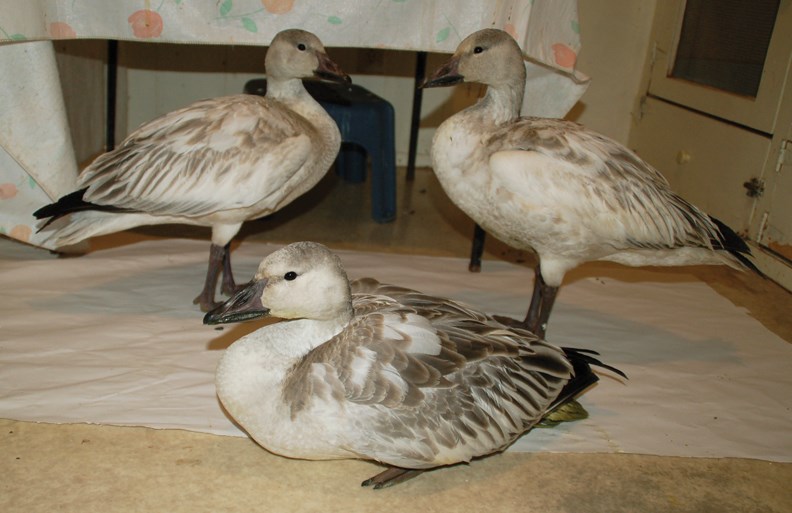 These snow geese are resting and fattening up at the Gibsons Wildlife Rehabilitation Centre after being found exhausted and unable to move by residents in Halfmoon Bay and Roberts Creek.Christine Wood Photo

Exhausted snow geese have been literally dropping out of the sky on the Sunshine Coast and landing in yards and on roadways, unable to return to their flocks to complete migration.

The Gibsons Wildlife Rehabilitation Centre (GWRC) had three snow geese brought in for care this week, and Irene Davy of the centre said that while tests were still being done, it appeared the birds were too physically spent to carry on.

“We haven’t done a fecal on them to see if there’s anything internally, but they’re skinny and they’re young and we think because they migrate from Russia and up that way, it’s just that they’re exhausted,” Davy said.

“It’s hard for them to find food so they’re just landing anywhere.”

Snow geese are currently migrating over the Sunshine Coast on their way from Russia to the George C. Reifel Migratory Bird Sanctuary in Delta.

The birds travel about 5,000 km to reach the sanctuary and spend the winter with more than 70,000 snow geese that make the trek.

The three geese now in care at the GWRC will be fed and given time to rest. In a week or so, Davy said, a volunteer will be asked to transport the geese to the bird sanctuary, as it’s difficult for a flock bird to find its way on its own.

“If we get a bird in that’s part of a flock, we don’t just like to let it go anywhere,” Davy said. “It’s better if they’re in amongst their own kind.”

The three geese now in care were found in Roberts Creek and Halfmoon Bay by residents who were concerned to see the exhausted geese on the ground and unable to move away when people approached.

Davy said any flock bird found on its own could be in trouble and in need of assistance.

If you find a snow goose alone on the ground, Davy said you can put a towel or sheet over it and transfer it into a box to be taken to the GWRC at 1211 Carmen Road in Gibsons.

The GWRC is a non-profit, volunteer-run organization. You can call them at 604-886-4989, and see www.gibsonswildliferehabcentre.org