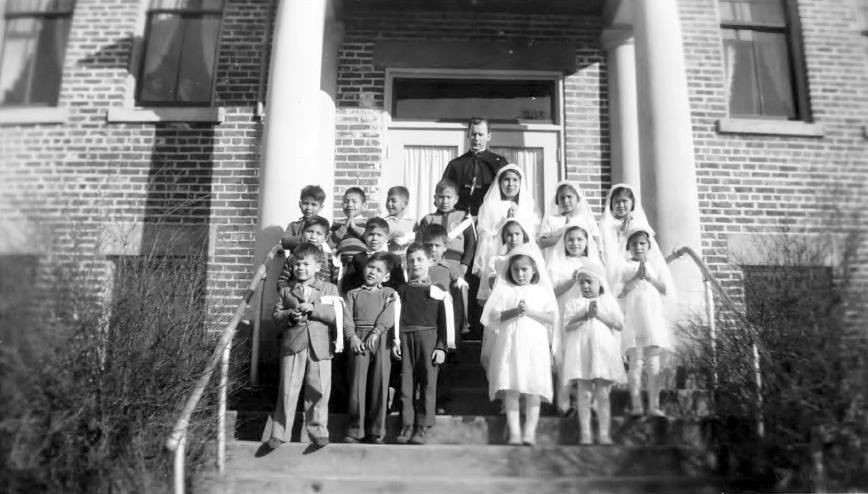 Students and staff stand in front of the Sechelt Residential School, date unknown.Image via National Centre for Truth and Reconciliation archives

A proposed settlement agreement between Canada and the representative plaintiffs in a day scholar class action lawsuit has been signed, led by Tk'emlúps te Secwépemc and shíshálh First Nations.

“The signing of this agreement marks an important milestone for thousands of day scholars who suffered harm while attending Indian Residential School,” said Crown-Indigenous Relations Minister Carolyn Bennett at a June 9 press conference announcing the agreement.

Day scholars are defined as students who attended residential schools during the day only. While day scholars could seek compensation for physical and sexual abuse suffered on school premises, unlike residents, they weren’t eligible to receive compensation for the experience of attending the schools, said Bennett.

At the press conference, Rita Poulsen, a shíshálh Nation representative plaintiff for the descendent class, and whose father was forced to attend residential school, said she agreed to stand up for children of day scholars, “to seek Canada’s acknowledgment for the loss of our language and culture, suffered not only by the day scholars but also their children.”

She added: “Because of what my father experienced at residential school, I did not have the benefit of learning our language, Sháshíshálhem. I did not experience our culture growing up.”

According to Government of Canada documents, a day school and residential school operated on shíshálh Nation lands between 1904 and 1975.

Under the settlement agreement, which still must be approved by a federal court, all day scholars alive as of May 30, 2005 are eligible to receive $10,000 in compensation. Families or estates are able to apply on behalf of those who have died since May 30, 2005.

The 2006 Indian Residential Schools Settlement Agreement compensation package granted survivors $10,000 for the first year they attended and $3,000 each subsequent year.

Paull told Coast Reporter following the announcement compensation is secondary to recognition of the harm done to day scholars. “The recognition part of it is probably the thing that is going to carry us through all this,” he said.

Paull said the main plaintiffs he spoke with “were content with the fact that the deal has been done and they could move on.”

Also included with the day scholar settlement is the establishment of a Day Scholars Revitalization Society, an Indigenous-led not-for-profit foundation that will distribute $50 million to survivors and descendants “to support healing, wellness, education, language, culture, heritage and commemoration,” said Bennett.

As a language teacher at School District No. 46, Poulsen said she has devoted her adult life “to learning, reclaiming and teaching Sháshíshálhem,” and was happy to hear about the fund.

“Commemoration will be important for the descendants of these scholars, to ensure no Canadian forgets the horrible legacy of the residential schools.”

Between now and August, class members will be able to review the proposed settlement and provide their comments to the court, which will consider them as part of the approval hearing set to start Sept. 7.

Bennett said while an apology is not part of the settlement agreement, they are working with survivors on the request.

The day scholar class action was certified in 2015 and involves more than 100 First Nations. In 2017, an agreement was signed by both parties to settle “in a timely manner” outside of court. Two years later, the Day Scholar Executive Committee declared negotiations had broken down because the government refused “to deal with Day Scholars survivors on the same terms as other Residential School survivors.”

Later in 2019 the committee said the class action was proceeding to court.

In August 2020, according to federal court documents, the court ordered on request of the plaintiffs that the Band Class be separated out.

Those claims focus on the “collective losses suffered by Indigenous communities as a result of the destruction of language and culture caused by residentials schools,” according to law firm Wadell Phillips, representing plaintiffs, and will continue to trial in the second half of 2022.

At the June 9 press conference, Bennett said the decision was made to separate the Band Class claims “to ensure compensation to survivors is not delayed further.”

When asked at the press conference what breakthrough led to the agreement outside of court, day scholar survivor class representative Charlotte Gilbert of Tk’emlúps te Secwépemc First Nation said she was approached about a month ago with options, including to go to court. “We’d been through that already,” she said, adding she didn’t feel right facing the trauma of revisiting her residential school experience again. She also said she didn’t want to risk losing in a trial. “There’s always that possibility, and I didn’t want to take that chance.”

Several day scholars have died since the 14-year process began, including representative plaintiffs and day scholars advocates Violet Gottfriedson and Fred Johnson. “I profoundly regret they did not live to see this day,” said Bennett.