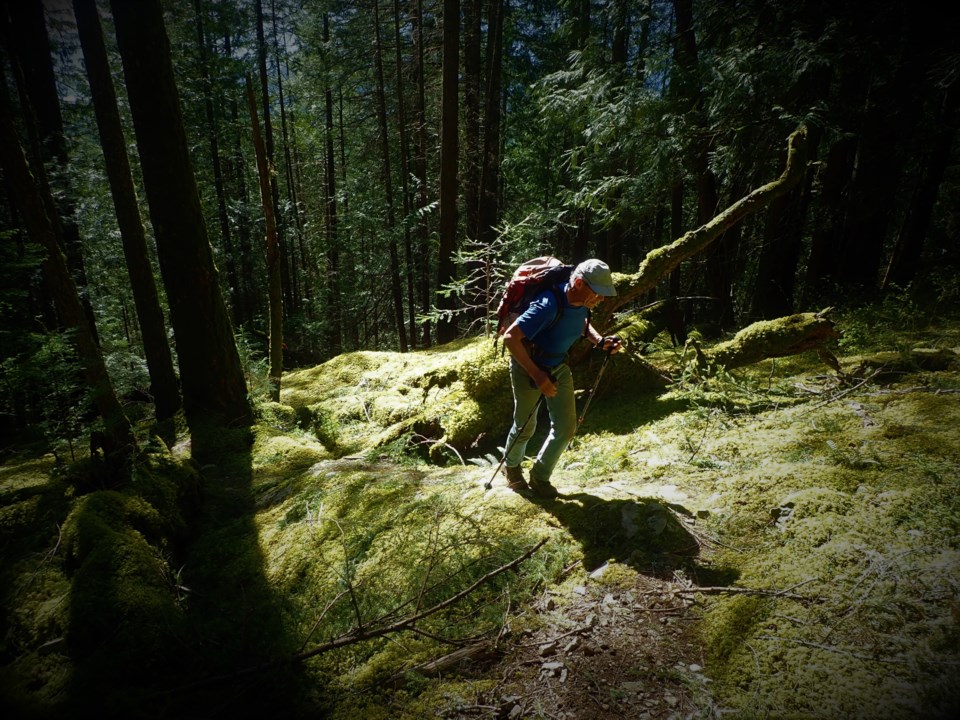 After months of protests cropping up on the Sunshine Coast to show solidarity for a logging blockade at Fairy Creek on Vancouver Island, advocates in Atl'ka7tsem (Howe Sound) are turning their attention to a cutblock closer to home.

On June 3, Gambier Island Conservancy launched an online petition against logging a six-hectare cutblock known as Woodlot 0039 near the Whispering Creek watershed on Gambier Island. The petition calls for logging by private woodlot operator Gambier Forest Resources Ltd. to halt immediately before it causes “irreparable damage” to the watershed.

On June 9, the petition had garnered more than 1,300 signatures.

A video by Bob Turner, filmed in late April and uploaded to YouTube on June 6, shows Tim Turner walking through the area designated to be cut. Turner, who is a director of the Gambier Island Conservancy and on the board of My Sea to Sky, leans over a recently cut tree stump, and says it looks like the Douglas fir was “well over 200 years” old.

“A logging plan on paper and a logging plan in hand, on the ground, are two very different things,” Tim Turner told Coast Reporter. He said that up until now the woodlot was confined to the Mannion Creek watershed, but the company ran a road over the drainage divide and into a new watershed. That is what triggered the public outcry, Turner said.

Although he acknowledges the woodlot manager is acting within their authority, Turner said “they had crossed a very significant geographic line, and what was at risk was one of the last significant scraps of ancient forest on Gambier Island.”

Gambier Island is the largest island in Howe Sound, and Turner said it is the last in the sound with ancient big tree forest remaining. The conservancy has concerns not only for the trees being logged, but also for sensitive or threatened species, nearby salmon spawning grounds, the water quality and the trail network.

Earlier this year, the conservancy began an environmental monitoring project that commissioned two studies in the area of the proposed cut to assess the ecological impacts of clearcut logging on the headwater area. Turner said this will act as a snapshot of the creek, its water quality and any species at risk from before logging takes place. The conservancy had hoped the reports would put a pause on logging.

While the area has experienced logging before, Turner said the headwaters have never been touched.

“We can kiss that creek goodbye if this logging goes forward,” he said.

Meanwhile, a letter writing campaign led by My Sea to Sky also calls for “an immediate moratorium on old growth logging while the 14 recommendations of the Old Growth Review Panel are implemented.”

My Sea to Sky’s petition says “ancient forests have intrinsic value for all living things and should be managed for ecosystem health, not just for timber sales.” It calls for letters to be addressed to Premier John Horgan, Katrine Conroy, Minister of Forests, Lands, Natural Resource Operations and Rural Development, and Nathan Cullen, Minister of State for Lands and Natural Resource Operations.

Turner said Whispering Creek is a perfect example of the kind of old growth forest that should be under a moratorium by the provincial government.

“We just don’t have time to be more patient,” Turner said.

Sunshine Coast visual quality objectives under review
May 8, 2021 6:07 AM
Comments