More than 30 current and past staff, students and volunteers of the Sunshine Coast’s community cable station gathered at the Maryanne West Studio at Elphinstone Secondary June 15 to mark the channel’s 40th anniversary.
Jun 17, 2019 12:27 PM By: Coast Reporter Staff 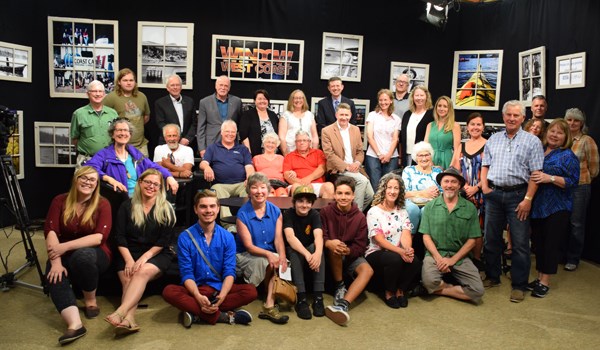 More than 30 current and past staff, students and volunteers of the Sunshine Coast’s community cable station gathered at the Maryanne West Studio at Elphinstone Secondary June 15 to mark the channel’s 40th anniversary.

Coast Community TV, now part of the Eastlink Community Television system, was founded by a group of Elphinstone students in the late 1970s, including Velcrow Ripper who went on to become an award winning independent filmmaker.

“We were actually an after-school group; we called ourselves ESRP, Elphinstone Student Research Productions. Our mentor and teacher, Marta MacKown, came up with this idea of creating a broadcasting community station,” Ripper said in a release about the landmark anniversary.

“We actually went to the CRTC on a school field trip, presented our short video and said, we as students want to run the local cable station, we can do it! And they said, OK, you can. They accepted our motion and this was born.”

The community channel is now part of the TV production courses offered at Elphinstone and many graduates have gone on to careers in the broadcast and film industries.

“I was working for the CBC when Coast 10 TV got started and had the opportunity to help Marta and the students with some of the technical aspects of their TV station. They were already well established in the community and when the job to manage the station became available, I jumped at the chance to work with the class and the community, and help the community channel continue to grow,” said Coast Community TV manager Steve Sleep.

“We see amazing students come through the television production class every year and go off to do amazing things in the industry.”

Elphinstone graduate Zach Greenberg, who is now working as technical director of the Ellen Show, said, “This program was life changing for me. I don’t know what I’d be doing today if this program hadn’t planted the seed of film and television for me.”